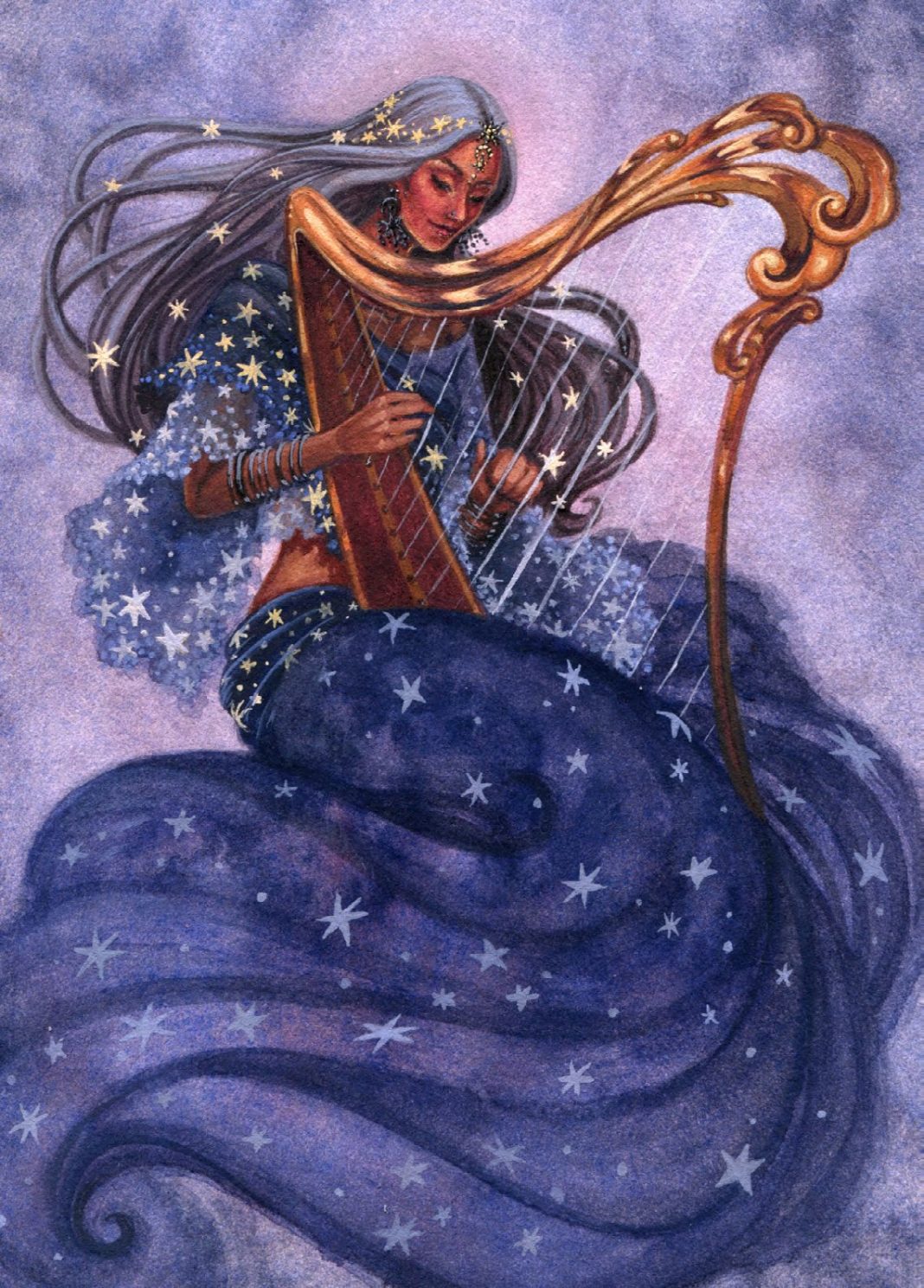 Enchanted Living: Can you tell us a bit about the story of Star Daughter?
Shveta Thakrar: I sure can! Here’s my elevator pitch: As Sheetal nears her 17th birthday, her buried stellar heritage starts to come out—and she accidentally burns her human father with her flame. Only pure star’s blood can save him,so she has to go on a quest to the heavenly realm to find her starry mother. Unfortunately, the only way to get that drop of blood is to win a celestial competition she never signed up for.

Also, I tried to fill the book with both shadow and light—lots and lots of (star)light.

EL: What was your inspiration for creating this book?
ST: Neil Gaiman’s and Charles Vess’s illustrated novel Stardust! I love that book, and it made me want to write a brown-girl version about a star whose mother was from a Hindu constellation. So I did.

EL: Can you tell us more about the mythology that permeates this book and your other work?
ST: I’m Hindu and grew up with so many amazing stories from the mythology, so once I realized I didn’t see books using that, I knew I wanted to write them. Hindu dharma is an ancient faith (really, it’s many smaller, regional faiths and traditions brought together under one umbrella), and the stories are so clever, complicated, interesting, and fun. People are heroes, people are villains, people are both at once … and there’s so very much to play with!

EL: Music plays an important part in this story. What role does music play in your own life, and how was it interpreting and describing the experience of music through words?
ST: I love music! I even (very occasionally) play the harp. I always have music on while writing, and when my husband and I drive anywhere, we listen to a CD—yes, a CD. We’re old-school like that. It taps into moods and atmosphere for me, which unlocks the doors to my imagination.

The translation was interesting, and I wonder even now how successful I was. But I think in terms of imagery, so I tried to describe how it would look and feel and sound through that lens. Imagine golden and silver notes flying through the air!

EL: I’ve read many of your stories, and one thing I’ve noticed about your work is how you manage to take concepts and mythology that aren’t as well known in the West as, say, fairy lore, and make them accessible for any reader, regardless of background. How do you do it?
ST: I think being a liminal kid—caught between cultures—helped me understand how to bridge the gap. So when I write about something, I have a pretty good intrinsic understanding of how to explain unfamiliar concepts in a way that doesn’t look like explaining. For any writers reading this, the trick is to weave that information in through context clues and description the same way you’d do it with anything else.

EL: In your novel, the world of the celestial court and its sidereal song of the stars is so vivid and fully realized. How many of the details of the court came from Hindu mythology and how much was your imagination?
ST: It’s definitely a hybrid. The gods, mythical beings, and nakshatras (constellations) mentioned are all straight from Hindu myth, but the description of Svargalok is all my invention, as is the starry court and its inhabitants.

EL: If you had to perform in front of a group of gods and goddesses, in a critically important performance, what would you play? And what beautiful garments would you wear?
ST: Oh, goodness! I suppose I would have to get better at playing harp really fast, and I’d put on an Indian outfit I adored as a child—but in an adult size, obviously: rich purple chaniya choli with silver ribbon detail. And of course, lots of ornate Indian jewelry and a bejeweled bindi.

EL: Sheetal is such a very relatable protagonist, and her struggles are universal. But your side characters also are wonderfully realized and easy to love. Even your “bad guys” in the story have their own motivations that are flawed but understandable. How do you strike the balance in how much detail to give even the smaller characters? And will we see any of them reappear in any future works? I could imagine any of them having their own novels or short stories.
ST: This a wonderful compliment! Thank you. Honestly, I had to work at it and keep in mind that everyone is the protagonist in their own tale, so I asked myself what would make them complicated enough to work as a character. No one is one-dimensional, even if they aren’t central to the main character’s story.

As for whether you’ll see the characters pop up again, I can’t promise anything, but I also won’t say it’s off the table. How’s that for ambiguous?

EL: Your books are filled with lush prose and vivid imagery. I have to imagine you live quite an enchanted life. What are some ways you bring enchantment into your day-to-day experience?
ST: I read lots of fantasy, I listen to evocative music, I decorate my living space in a domythic fashion, I wear clothes and accessories that evoke the feeling of being in a fairy story. I have a rich imagination and love to feed it by wandering into strange little shops full of colorful things. Above all, I surround myself with like-minded people, people who also long for the magical and the numinous, who understand that not everything can be perceived by the five senses. We need community, particularly in a world that has forgotten the power of living an enchanted life.

EL: What do you hope to accomplish with this book? Do you have an ideal reader, or an ideal way one might react to reading it?
ST: I want to help people who haven’t been represented in fantasy feel seen, and I want those who have been to appreciate the beauty in other cultures. My ideal reader is my child self, the little girl who didn’t get books like these but should have, and I definitely write to celebrate desi readers. But beyond all that, I hope Star Daughter speaks to everyone who reads it, desi or not.