Home Magic An Invocation to Witches 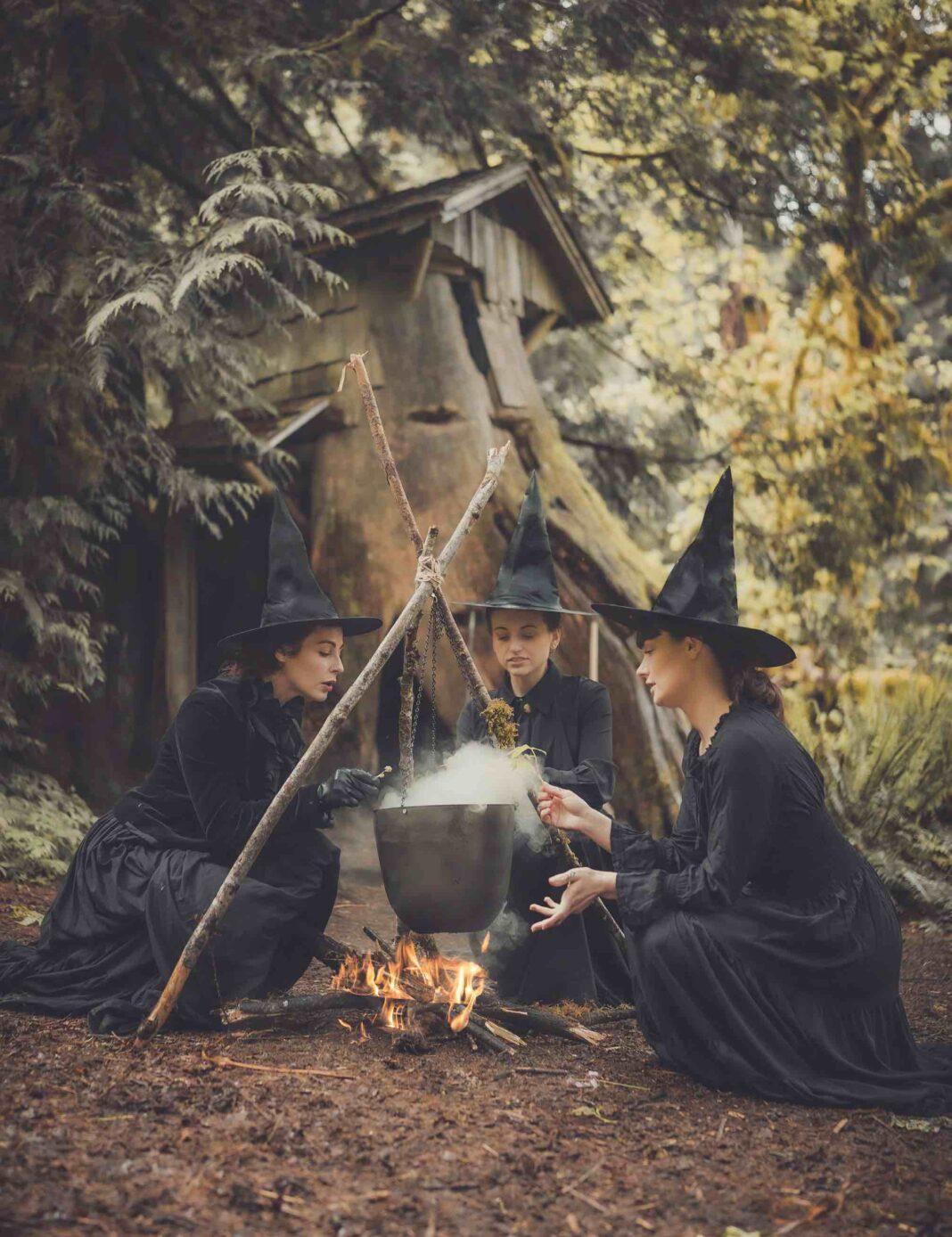 When searching for the right cover for this vintage witch issue, there were so many possibilities. The figure of the witch is rich and varied, and so many of you out there are creating gorgeous, witchy art, not to mention dancing under full moons and concocting herb-laden potions in your kitchens. But then this shoot appeared, as if by magic, in our submissions email and blew us away. Photographer Val Gleason says she saw that we were doing this issue and went to work, arranging this whole photo shoot near her home in Olympia, Washington. We love how old-fashioned and modern it is at the same time, how it captures that freedom and sisterhood that witches encapsulate. Yes, please!

To Gleason, a witch is “a strong, independent, free-thinking woman—someone who uses magic to push back against the norm.” Her inspiration for these images came from a few different places; the main ones were The Witch, directed by Robert Eggers, the book Waking the Witch by Pam Grossman, and Kiki Rockwell’s music, specifically the song (and video) “Same Old Energy.” We hadn’t heard of Kiki Rockwell or seen the video until Gleason mentioned them, but when we did, we were blown away again. Maybe you know the video: In it, four young women are hard at work in a historic, buttoned-up setting, until they put down their tasks and run into the fields, defying a dour, Puritan man who tries to hold them back. They break into dance, eventually joining a whole group of women dancing and spinning around a fire. It’s a powerful song and video, defiant and joyful:

We used our scrying powers to find Rockwell, then asked her to tell us more about the song and her vision. This is what she wrote to us:

I noticed something, a buzzing, a high-frequency energy that occurs when a group of women are together in a room. And I also noticed how the men suddenly shrink, tail between legs, their dark blue recoiling at the hot pink electricity of women in community, how we triple in size and take up space when we are not under the watchful eyes of man. And I thought about how thousands of women were sentenced to die for that very same power that man has simply never understood and therefore has always been intimidated by, has needed to own and control. How men love to sexualize us and then rage when we can do it for ourselves. How shame has always been a tool for oppression. How at fifteen I learned to dilute myself in a room full of grown men or face danger. How brave and clever women have been written out of history books. How I looked at all the songs I’d ever written and realized they were all about some dumb boy not loving me back. I yearned to write about something that mattered.

On a family trip to Salem, Massachusetts, when I was sixteen, I felt the creative spirit come over me for the first time, something ancient, and for the first time I sat and wrote poems without being embarrassed. My dad told me how our direct ancestors were both burned and burner during the Salem witch trials. Then after, we went to Maine and I watched my pagan witch auntie Annie Finch lead a circle on the stormy coast, women dancing and chanting and sharing poetry and words and screams and laughter. A fire was kindled in me. “Same Old Energy” was one of those songs that fell out of me in one night, around 2 a.m., every verse spilling into my notes app fully formed, my hands could barely keep up. I truly believe I don’t even write the songs consciously, but rather that I channel them from some other realm. I spent the next week producing the song in my bedroom on GarageBand until I had something that made me want to dance naked in the woods.

We hope you love these images by Gleason here, and that you’ll take a look at Rockwell’s “Same Old Energy” online, and that you’ll head out into the woods—maybe even this very eve if you’re so inspired—to dance and sing and scream with laughter.