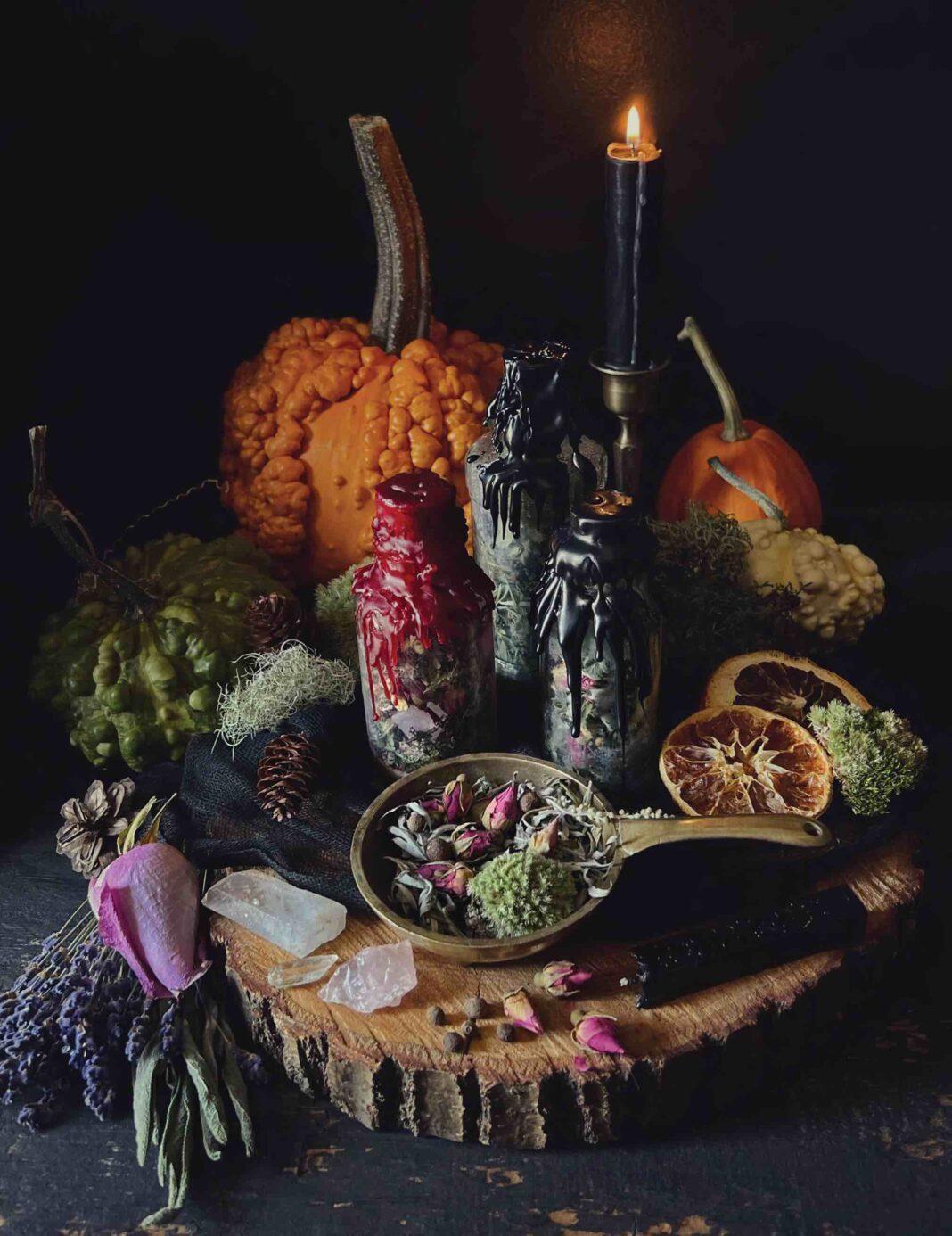 A wonderful way to celebrate autumn and create something special for yourself or a friend is to create a magical spell jar. They’ve come a long way since their inception in the 16th century and can bring love, happiness, and healing into your world.

Spell jars, originally referred to as witch bottles, were historically made in the 16th and 17th centuries and used by both witches and nonwitches alike in England and North America, in places like Salem, Massachusetts, and the Hudson Valley. They were concocted as amulets to protect against perceived malevolent magic and supernatural entities. The vessels were frequently handcrafted with the purpose of safeguarding a new home and were either buried upside down next to the foundation or placed beneath the hearth as the structure was being built. Witch bottles also served the purpose of returning a spell back to the supposed witch who cast it.

Early witch bottles were made of salt-glazed stoneware and traditionally prepared by an individual known either as the village witch or folk healer. They were filled and personalized with interesting and sometimes bizarre ingredients like the customer’s strands of hair or fingernail clippings, or even urine, tiny animal bones, thorns, pins (often pushed into felt or cloth hearts), and wrought iron nails. It is thought that these bodily components served as an extension of the self and that any maleficence directed toward the individual would be drawn into the bottle and stuck by the sharp objects therein, rendering the negative energy harmless. The completed bottles were given to the client with instructions to either bury them, throw them into a fire, or toss them into a river or stream, depending on their intended use.

Today, modern witches create their own versions of the original witch bottles, though they might avoid odd ingredients and use them for a wider variety of intentions and not exclusively for protection from negative energies. Common themes include prosperity, healing, love, friendship, peace, creativity, and more. Modern-day witch bottles have been known to include such ingredients as herbs (especially rosemary), flowers, red wine, seawater, salt, vinegar, oil, ashes, sand, coins, wood, shells, feathers, knotted threads, stones, and crystals.

With a few simple tools and easily attainable ingredients, you can make your own witch’s spell jar—whether you think of yourself as a witch or not! As a green witch, I craft primarily herbal spell jars, and I’m excited to share my how-to with you. I like to use petite vintage glass bottles from my antique bottle collection. I love the worn and cloudy appearance of an old bottle, so unless it’s particularly filthy, I don’t scrub it clean for fear of washing off its story and the beautiful and mysterious patina cast by the hands of time. I do, however, like to energetically cleanse newly acquired old bottles with herbal incense smoke, giving them a clean slate for the intentional magic I will fill them with. To do so, you can pass your bottle through the smoke or insert a burning incense stick for a couple of seconds.

To make your spell jar, fill a small glass bottle with dried herbs, spices, and crystals that have magical properties associated with your magical intent. For instance, if you wish for a relaxing sleep infused with memorable and vivid prophetic dreams, you could fill your bottle with dried mugwort, lavender, and amethyst crystal. All three of these ingredients work together to promote vivid dreams and psychic visions as well as to provide protection and induce a calm and relaxing sleep. I’ll give you some other bottle-theme ideas and recipes toward the end of this article.

Place a cork stopper in your filled jar and seal the top with wax. I bring the vintage bottles to my local hardware store and purchase tapered cork stoppers to fit them. You can melt and drip sealing wax or candle wax over your bottle. I prefer sealing wax, as it’s thicker and easier to control. As long as the seal stays intact, the potency of the preparation’s magic will remain. Consider using wax of a color that corresponds with your intention. Below are some color correspondences you can use—notice that some intentions correspond with multiple colors:

When the crafting of your spell jar is complete, recite your wishes. Your spoken intentions can be very matter-of-fact, or you can try waxing poetic. Maybe something like …

Herbs, flowers, spices divine,
Dance with sparkling crystal in this spell jar of mine.
That which I desire for good, please grant me.
Work your potent magic. Blessed Be.

Place the bottle on your sacred altar or in a place where you would like its influence to work. Continue to focus on your intention and use your own efforts to help bring your wishes to fruition. Spellwork is work on your part, as well on the part of the helping hand of the universe.

Here are a few dried herbal combinations you may wish to try, associated with common themes. Of course, feel free to change them based on your needs and the availability of herbs. I also tossed in some crystal correspondences. You can mix and match recipes if you’d like, depending on your goals.

*All plant matter used for your spell jars should be thoroughly dried to prevent mold and mildew from forming.

Susan Tuttle
Susan Ilka Tuttle is a green witch, herbalist, spirit medium, author, and photo artist living in rural Maine. Enjoy her new book Green Witch Magick, in which she explores thirteen essential herbs for the witch’s cupboard through herbalism and magic-based projects. Visit her botanicals shop at inthewoodbotanicals.com, learn about her spirit mediumistic readings at susantuttlespiritmessenger.com, and follow her on Instagram @whisper_in_the_wood.