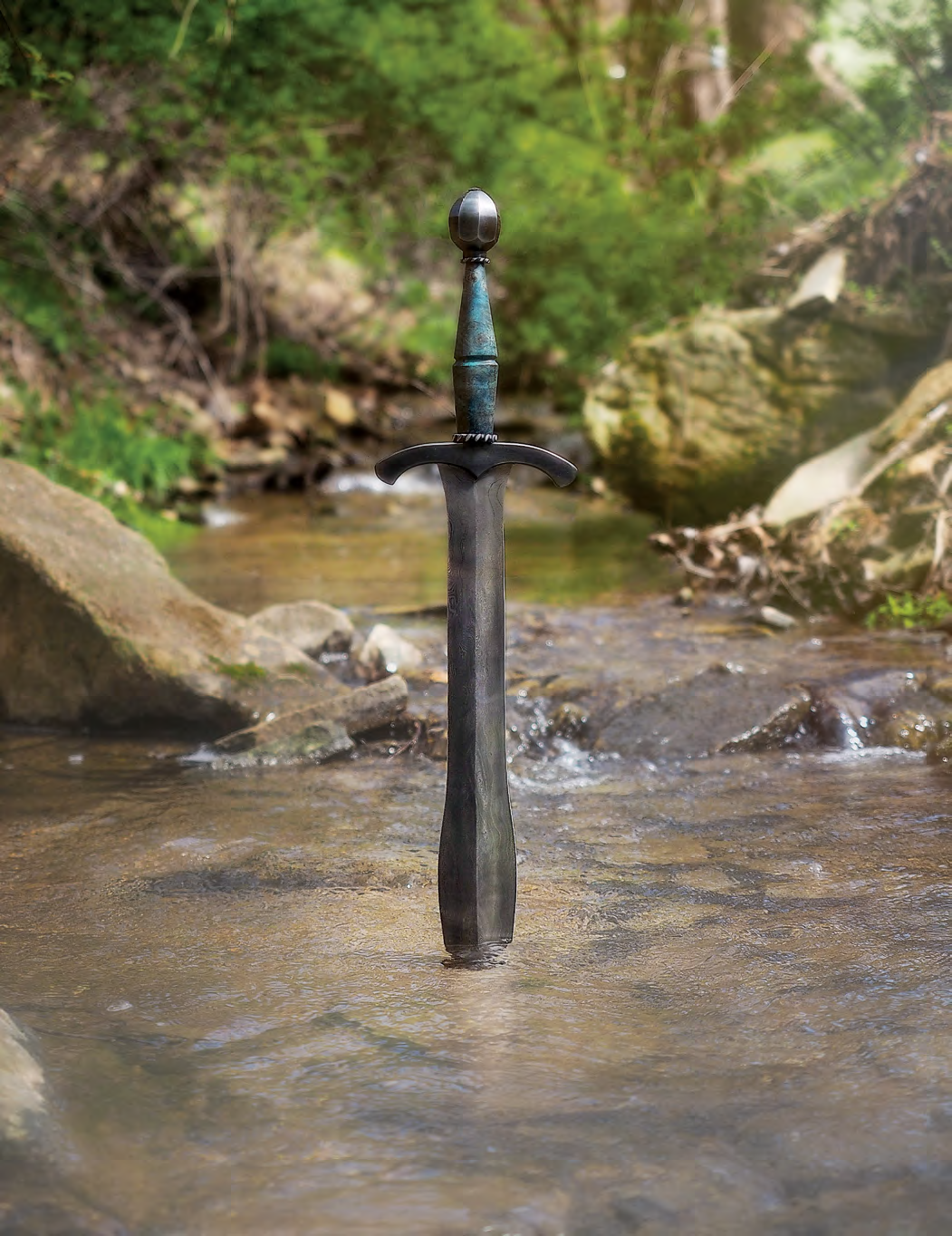 by Carolyn Turgeon and photography by Steve Parke

As you wind through Patapsco State Park, just north of Baltimore, passing a flagstone-encrusted quarry and crossing a defunct train track that parallels a charming stream, you come to a quiet little valley where sparks fly and hammers forge. Stepping into a rustic blacksmith shop, you might be going back in time. Pieces of suits of armor hang from the walls and detailed, hand-forged hunks of metal are scattered around, in various stages of refinement. Massive machines from bygone times loom over everything, like creatures from the deep sea.

This is where, on any given day, the smiths at Baltimore Knife and Sword craft everything from traditional pirate cutlasses to Renaissance-era Katzbalgers to Japanese katanas to the kind of broadsword King Arthur might have wielded. Last year, they introduced their version of a Khopesh—a “really wild-shaped Egyptian sword,” as co-owner and smith Matt Stagmer describes it. This year, they’ll reproduce a 400-year-old Chinese sword that a friend found described in an obscure fight manual. As Stagmer says, the smiths at Baltimore Knife and Sword are “literally bringing history to life.” 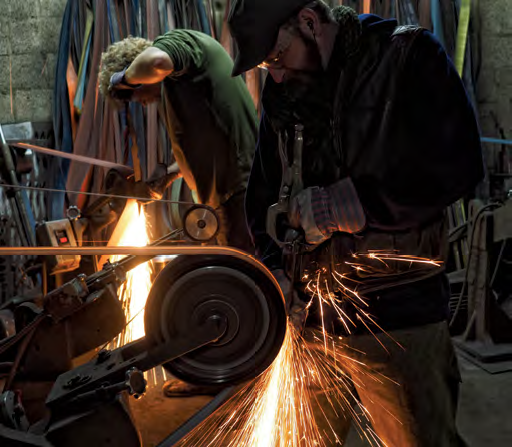 Imagine living in medieval Russia or during the Revolutionary War. Or imagine running with the elves in The Lord of the Rings or trying to rescue the princess in The Legend of Zelda. To bring the weapons from these periods and stories to life, Stagmer and the other smiths imagine that they themselves inhabit these far-flung times and places. “Say I want to make a Scottish basket-hilt sword, which was made famous in Rob Roy,” Stagmer says. “I’ll look at fifty different types of Scottish basket hilts and then use that inspiration to create my own design. What we do most of the time is take a large body of historical references and then imagine we’re actually blacksmiths working in that culture.”

Not surprisingly, the smiths at Baltimore Knife and Sword are obsessed with history and have a huge library between them of not only historical weaponry texts but also books of paintings and textiles and anything else that might offer a glimpse of some gleaming long-lost blade. “You have to be a bit of a Sherlock Holmes about some things here and there,” Stagmer says. “You’ll see something like a coat with some striking embroidery pattern and then, later, find an unclaimed suit of armor with the same pattern and start putting pieces together.” 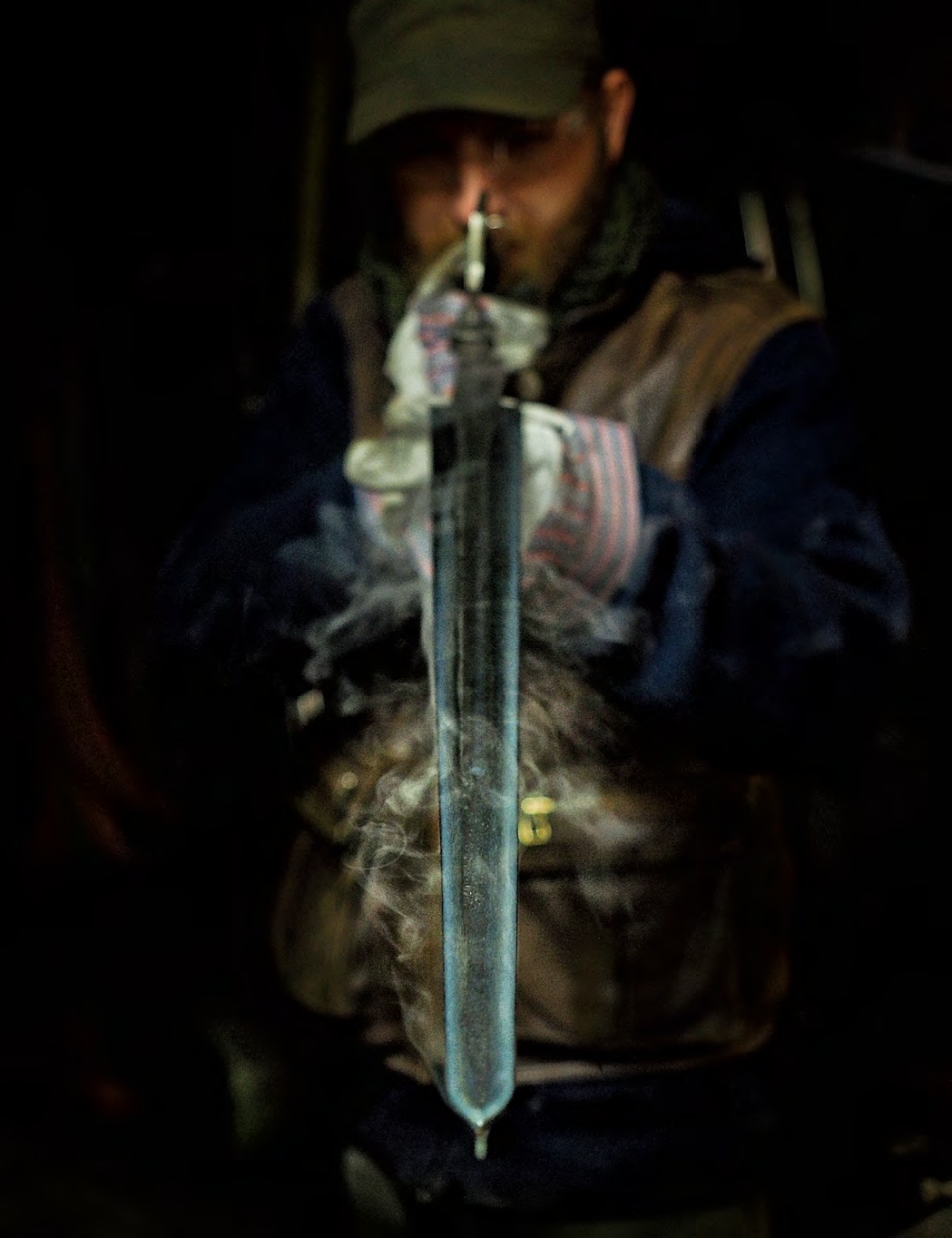 Occasionally, dipping into history can come full circle. “One piece that I first saw in one of my favorite books, Blades of the American Revolution, was just a normal-shaped cutlass guard from the Revolutionary War. Nothing fancy about it. But it had two very distinct hearts cut out on either side of the blade.” Stagmer made a replica of the sword, and it became hugely popular for a number of years with both male and female clients. “And then recently I visited the Howard County Historical Society and that exact sword was there sitting in a case,” he says. “It was really neat to see the sword I’d copied from a book right there in front of me. When I held it, I was just like, Wow.”

Not all the swords made at the shop are historical. Many come straight from fantasy, whether from a beloved book, film, or video game. The Lord of the Rings has been a huge inspiration for “just about anybody” doing swords and armor. “Everybody read The Hobbit in school,” Stagmer says. “In Maryland, you read it in sixth grade and again in seventh grade and eighth grade. For people who grew up as Dungeons & Dragons fans, The Lord of the Rings is kind of like the Holy Grail. You don’t only get knights; you get dwarves. You get wizards. You get elves.” Stagmer himself watched the movies “more times than I like to admit—really, at one point, every night.” He is inspired by the work of Peter Lyons, who designed the swords for the films. Indeed, one of the more popular swords the shop makes is the leaf blade based on Gandalf ’s sword, Glamdring. “We make between three and a dozen leaf blades every week. They combine Western-style sword mounts with your classic cruciform cross guard and pommel, all on a long, slender leaf blade, which is a beautiful thing. You don’t see too many of them.” 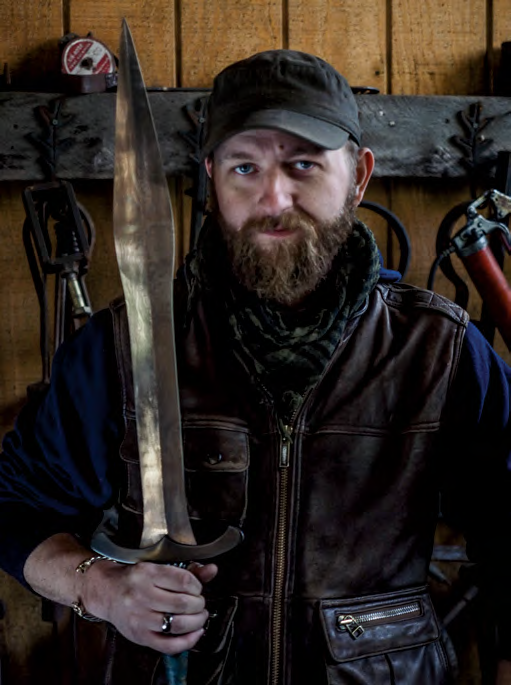 While he’s clearly passionate about his work, Stagmer didn’t always plan to make swords. The company began when, in the early 1980s, his oldest brother Emory and a friend started making chain mail and selling it, first on the Ocean City, Maryland, boardwalk and then at the Maryland Renaissance Festival. Matt was just an infant when they decided to move on to other things, but another older brother, Kerry, took over and opened up Baltimore Knife and Sword. In the early days, Kerry focused on stage combat swords for jousters at Renaissance fairs. “For many years,” Stagmer says, “when the business was just Kerry’s, he made primarily two swords: a hand-and-a-half thirty-two-inch-long sword and a one-handed sword with rapiers.”

Kerry was almost 100 percent self-taught, learning through trial and error and the occasional expert whose help he’d seek. “When he started, he just used a hand grinder to grind blades out of chunks of steel,” Stagmer says. “He didn’t know anything about heat treating or anything like that.” But slowly, his skills evolved—into a business with thousands of swords in its repertoire. 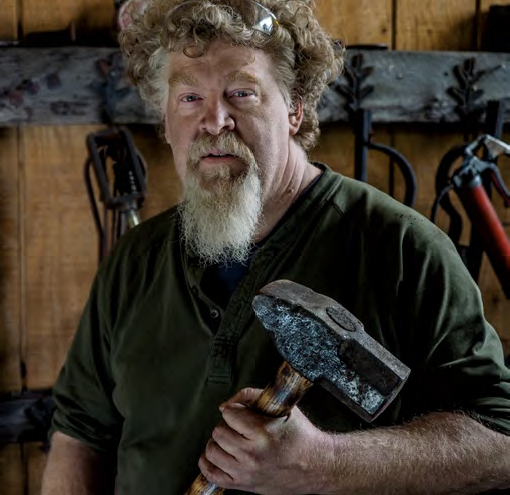 What was it like to grow up around a blacksmith shop and those brilliant, shining weapons that might have been carried by Lancelot or Sir Gawain? As a kid, Stagmer loved the Renaissance festivals where Kerry hawked his wares—not only was he transported back to the world of the King Arthur books he loved so much, but he was adorned in elaborate custom-made armor. “Little kids weren’t really allowed to wear armor and stuff at the fair,” Stagmer says now, “but I was Kerry’s little brother, and so nobody messed with me. And if the king or the queen of the fair were walking by with their armed guards, they would all bow to and acknowledge me. I grew up there, and I was spoiled a little bit because of it.” In that environment, Stagmer “wasn’t the weird kid anymore.” He was fifteen when he started rollerblading to his brother’s shop after school and working until late at night. For a long time he figured it was just a hobby. He thought he’d pursue a career in computers or art or even the military, but one day he woke up and decided that he would just devote himself to the work he’d been doing all along, work that allowed him to visit other worlds every day.

Today, each smith in the shop—which remains small, with every sword guaranteed for life and passing through both Matt and Kerry’s hands—has a different specialty and different passions that drive them. After all those early years of trial and error, Kerry went on to become classically trained in metal work, studying with, among other masters, Valentin Yotkov, the world’s best at repoussé and chasing—ancient techniques for creating intricate, detailed designs on low-relief metal. Kerry now makes high-end jewelry in addition to working with swords. 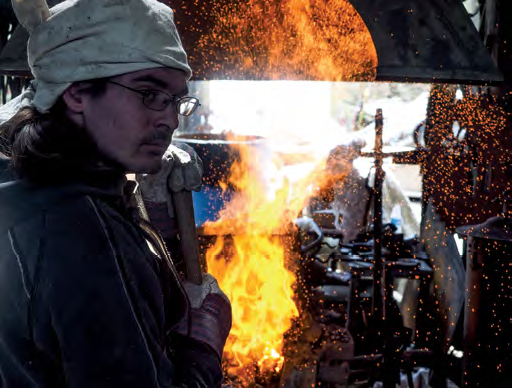 Another of Baltimore Knife and Sword’s smiths, Ilya Alekseyev, immerses himself in different cultures and is currently obsessed with Japanese katanas, even having learned to smelt his own steel according to traditional Japanese methods. As a result, the shop now offers “a pretty-close-to-traditional Japanese piece that’s all made here. And it’s from scratch, starting from iron-rich sand,” Stagmer says. Stagmer himself remains dedicated to sword making. “That’s what drives me. Sword making will never get boring because there’s always something else to do, something new to learn.” When asked about his favorite weapon, he does not hesitate to name the legendary sword of Charlemagne, Joyeuse, which was said to shine more brightly than the sun and could blind one’s enemies in battle. Plus, there are dragons—open-mouthed, forming the cross section of the grip. When asked if he’s ever tried to make the Joyeuse himself, Matt admits he hasn’t. “I think every artist puts certain things on a pedestal and always intends to get there—their thesis statement or their final project per se.” 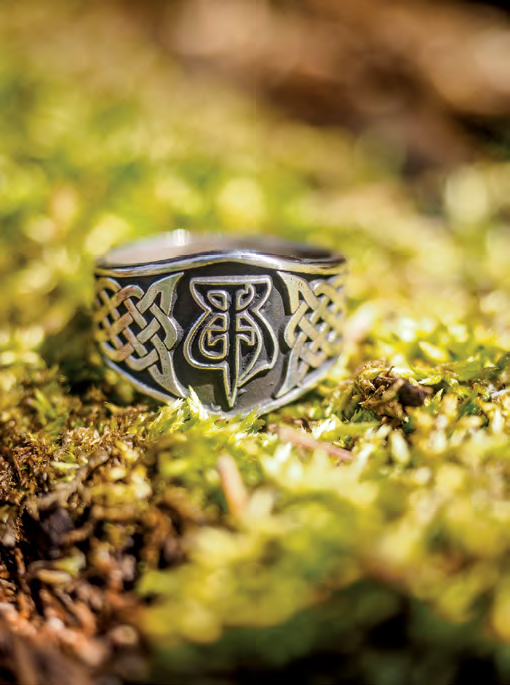 All the personalities and passions of Baltimore Knife and Sword’s smiths come to life on the shop’s hit YouTube show Man at Arms: Reforged, which features them all working together to build one fan-requested over-the-top fantasy weapon each episode. They’ve tackled swords like Loki’s staff from the Avengers movie, Arya’s Needle from Game of Thrones, the Green Destiny sword from Crouching Tiger, Hidden Dragon, the Gravity Hammer from the Halo video game, Hattori Hanzo’s katana from Kill Bill, and many more that your average person would never get to hold. In one episode, the team imagines what kind of sword Iron Man might carry (one designed in the software program AutoCAD, it turns out, and “so heavy it would take an exoskeleton to wield”). Translating each piece from fiction to actual object requires all kinds of creativity, and each smith adds his or her own expertise to the mix. While Alekseyev may forge the metal, it’s Matt who usually grinds the blades, Kerry who operates the machines, Lauren Schott who does the casting (for special parts like the bright glass bulb on Loki’s staff), Sam Salvati who does general blacksmithing, and John Mitchell who helps in the fabrication.

Man at Arms: Reforged illuminates every aspect of building a sword—from forging the blade to making the handle and pommel to the final assembly. Each build poses its own set of challenges, forcing the team to come up with solutions on the fly. Stagmer emphasizes problem-solving prowess as fundamental to a sword maker’s skill set. “My advice to aspiring sword makers is to, first, join the local blacksmith guild and, second, get really good at Sudoku and word-problem games,” he says. The show has a passionate fan base, with nearly 400 million views and 4.5 million subscribers.

And to think it all started with two friends who loved Dungeons and Dragons and started making chain mail by hand to bring that world to life. “I think there’s a resurgence in this country and worldwide of handcrafted goods,” Stagmer says. “These days, if you want to learn how to craft something and you’re sitting on your hands, then you’re a fool, because you can go onto YouTube and say, ‘I want to know how to make my own shoes’ and find a thousand different people who’ve posted about making shoes.” The most rewarding aspect of the show, Stagmer says, is hearing from those people. “I’ve gotten tons of emails from fans saying, ‘Hey, I know this has nothing to do with sword making, but watching your show really inspired me to dig out grandma’s sewing machine. And I’m making costumes now.’ Because they see someone literally starting from scratch and creating, and they realize, ‘I can do something like that too.’ And they look around and see what they have, and they do it.”