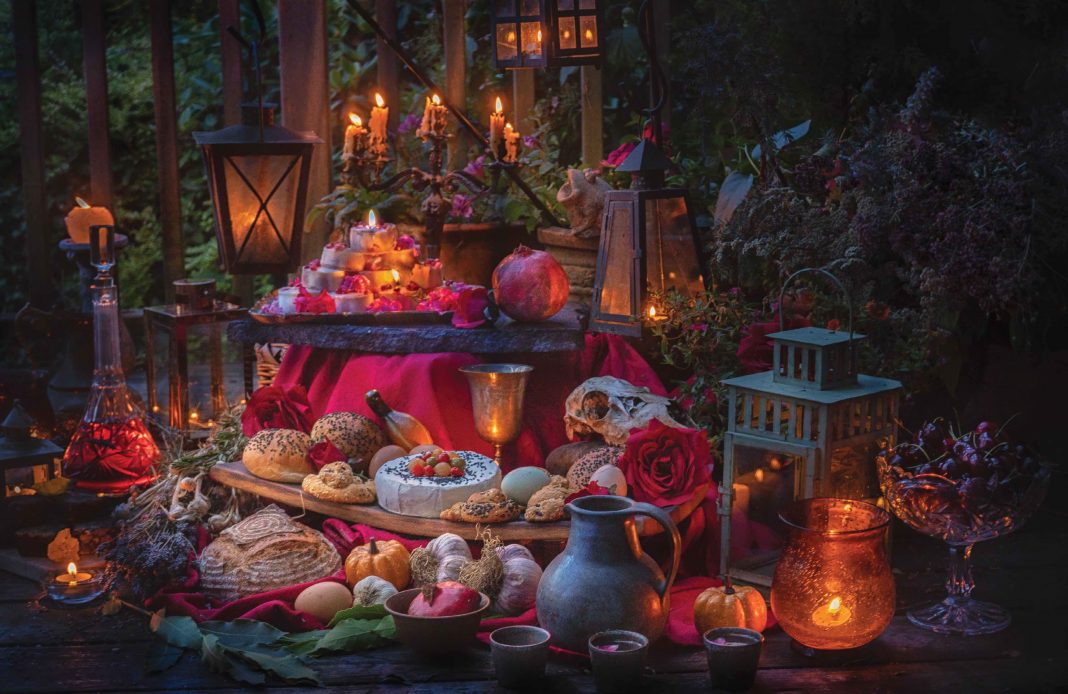 Recipes and Photography by
Danielle Prohom Olson (a.k.a. Gather Victoria)

Samhain is a time for honoring the ancestors and feeding the dead—so why not invite Hekate, queen of the shades and shadows, for dinner? Despite her bad reputation as sorceress of the dark arts, this goddess was a very sought-after houseguest in ancient Greece, especially on the night of the dark or new moon. Emerging from Hades with her retinue of baying hounds, she gathered the souls of the recently departed. And to help safely convey them to the underworld, a sacramental meal called Hekate’s Deipnon was served. If Hekate was pleased and the dead well-fed, she would grant protection, harmony, and prosperity for the household, family, and city-state, not to mention a few magical favors!

Today her supper is popularly associated with desolate crossroads, but the Deipnon was most often held at home—right outside the front door. For the women of ancient Athens, Hekate was far more than a goddess of the dead and the underworld; she was a very earthly protectress of the home. Her magical symbols were familiar items in every household: Keys locked doors against intruders, dogs guarded the threshold, and torches illuminate dark doorways from lurking ne’er-do-wells.

Since Hekate was a goddess of domestic protection, her rites included household cleansing and purification. The Deipnon fell on the close of the lunar month, a time for removing any bad or stale energy (often called “miasma”) one didn’t want to carry forward into the new. Homes were swept clean, and purifying herbs such as bay laurel, lavender, and rosemary were burned. At dusk, supper was laid out. Breads, cakes, fruits, cheeses, garlic, onions, eggs, fish, sesame seeds, almonds, and libations of wine and honey were common offerings.

Many foods, including breads, small cakes lit by candles, and pomegranates, have been sacred to earth and fertility goddesses since deepest antiquity. And they have played an important role in funerary rites for just as long. Others, like garlic, onions, and eggs, banished the dreaded miasma, and libations were poured into the ground to reach the dead below.

According to many scholars, the Deipnon was not meant to be consumed by mere mortals and was left untouched. But as the following quote from a play by Aristophanes suggests, it may have served a more material function: to feed the poor. “Ask Hecate whether it is better to be rich or starving; she will tell you that the rich send her a meal every month and that the poor make it disappear before it is even served.”

Whether you decide to consume your Hekate Supper or donate it to a homeless shelter is up to you—but Hekate’s Supper resonates with me not just as an incredibly beautiful ritual of ancestor veneration, household protection, and blessing, but as an expression of the oldest magic of all: food magic.

So this Samhain I suggest a modern Hekate Supper potluck. Invite friends to bring food or libation to offer Hekate and place these offerings on an altar with lanterns, candles, and Hekate’s herbs and magical talismans. Light the lanterns while asking for illumination and protection, and reflect on what you wish to release from the old year and welcome into the new. Then, after a toast to honor the queen of the witches, the spirits of the season, the ancestors, and our beloved who have crossed to the other side, dig in and celebrate the delicious pleasures of living! 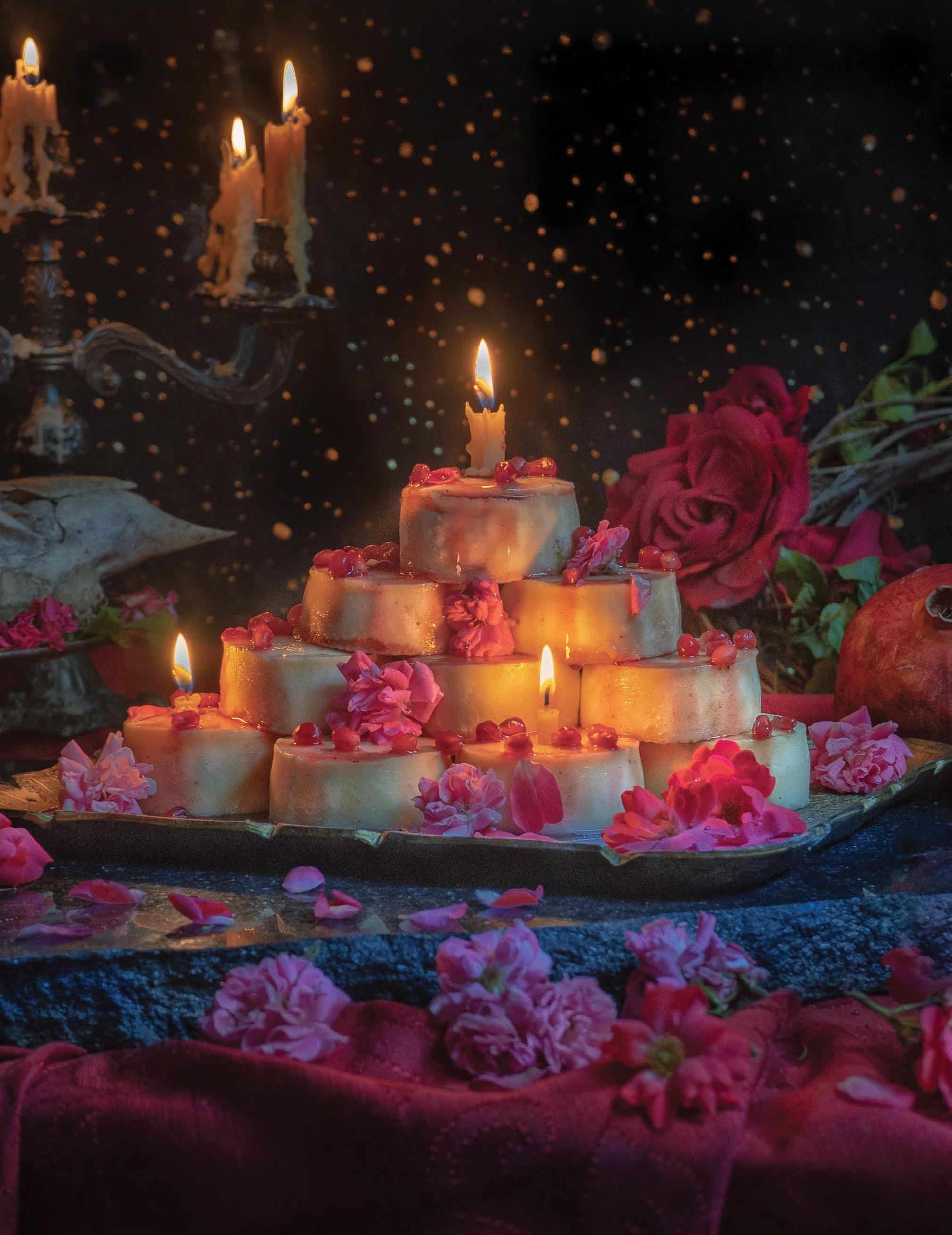 A common offering at the Deipnon were small cakes similar to cheesecake. I flavored and adorned this recipe with rose and pomegranate, traditional offerings to the great goddesses of the ancient world. Symbols of fertility and the pleasures of earthly life, both were associated with death and the underworld as well. Hekate is often said to wear a crown of roses, and the funerary use of rose wreaths dates back thousands of years. Similarly, the seeds of the pomegranate (arils) are associated with the realm of the dead. In the popular Greek myth of Persephone and Hades, all it took was one small bite to banish Persephone to the underworld. In some versions of this myth it was Hekate whose torches lit Persephone’s journey back to earth.

Pomegranate and Rose Swirl Topping
Simmer all ingredients over medium-low heat until the liquid is reduced to ⅓ cup and is the consistency of syrup. Allow to cool. Sieve off the rose petals before using.

Crust
Mix almond meal with melted butter in a small bowl or food processor. Work until dough forms a dense, cohesive texture. Dividing up into even portions, press the almond mixture firmly into bottom of your pans using a spoon. Set aside.

Cheesecake
Preheat oven at 320°F. Beat cream cheese until soft. While beating, gradually add in sugar. Then add in eggs one by one, mixing until just combined. Add vanilla extract, lemon juice, flour and blend. (Try to avoid overmixing at each stage as it can cause cracking while baking.)

Remove from oven and leave to cool to room temperature. Refrigerate in the pans overnight. When ready to serve, remove from pans and place on a serving tray. Pour a small amount of syrup over each cheesecake and garnish with pomegranate seeds and small candles.

Note: I used small, 3-inch springform pans, which made eight cheesecakes. You can also use cupcake liners in a cupcake or muffin tin.