From the Old World to the New, throughout history and within pop culture, witches, both real and imagined, have been a source of enduring fascination, sometimes exalted, usually feared. Western civilization as of late has generally depicted them in broad strokes, as broom-riding, pointy-hat-wearing hags tending bubbling caldrons, or mischievous sex kittens, wild and dangerous. But whether you prefer Macbeth’s three weird sisters, or the trio of bored housewives turned naughty in The Witches of Eastwick, the reality of witchcraft is far more nuanced and enthralling than the clichéd representations of it frequently found in literature and film.

For an in-depth look at the long, tangled, and often tragic history of witches and warlocks—and their charms, incantations, and conjurations—head to the following museums. Scattered around the world, they tell tales of the remarkable women and men whom society has so often misjudged. 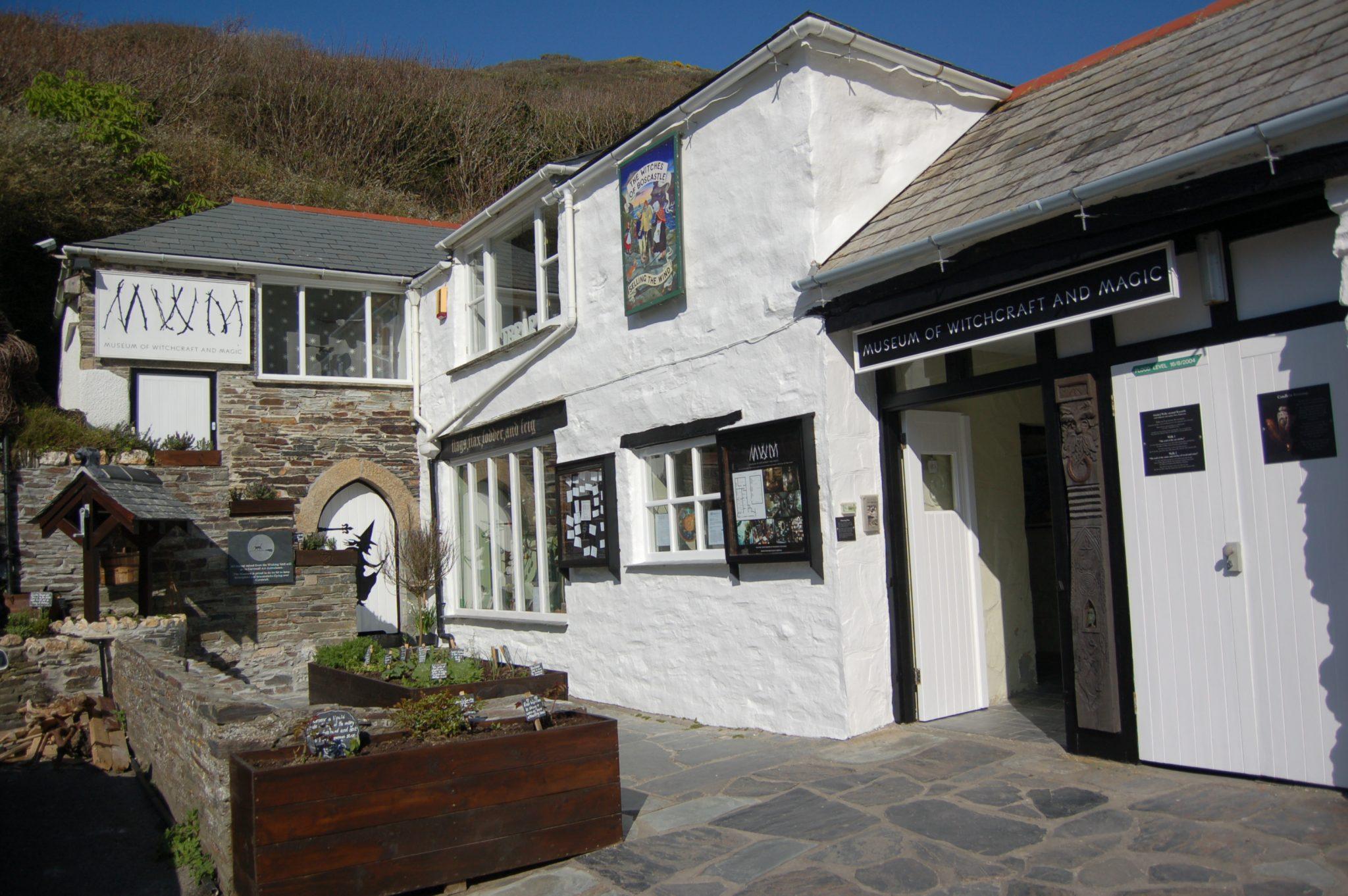 The grandmother of institutions dedicated to sorcery and those who practice it, the Museum of Witchcraft and Magic bills itself as featuring “the world’s oldest and largest collection of items relating to witchcraft, magic, and the occult.” Some 3,000 goodies are spread out over two floors and thirty-five exhibits, including 16th century witch bottles, which were filled with enchanted objects like pins and salt and used to turn curses back on those who cast them; a charm bag of bumblebees said to bring prosperity; and a human skull once owned by a witch. In addition, the museum is the repository for more than 7,000 books about spellcraft and the like.

The Museum of Witchcraft and Magic also hosts a wide variety of special events and exhibitions, like “Betwixt and Between Isobel Gowdie, the Witch of Auldearn.” The show is an exploration of the confessions of the 17th century Scottish woman, describing in great detail activities like shape-shifting and cursing crops, and it will run through Halloween. In 2020, for the first time in its history, the museum will offer an artist’s residency, with the chance for a visual artist to work with the institution to create a new piece. Applications for the residency, which will start in spring, are due October 31. museumofwitchcraftandmagic.co.uk

Tucked within the red-bricked, Gothic confines of a former church built in 1846, the Salem Witch Museum examines the Salem Witch Trials of 1692 that led to the hanging deaths of nineteen people. During the reign of terror, which was famously detailed in Arthur Miller’s play The Crucible, one accused man was crushed to death for refusing to enter a plea, and another five souls perished in jail. Based on actual trial documents, the exhibit tells the twisted tale of lies, cruelty, and hysteria through thirteen life-size stage sets and figures, with dramatic lighting and narration.

A second presentation, “Witches: Evolving Perceptions,” is a guided look at how views of witches have changed throughout the years, separating truth from stereotype-perpetuating fiction, as well as a presentation of modern witchcraft customs and the phenomenon of witch hunting.

Travelers to Salem will also want to take the opportunity to visit The Witch House, the last structure in town with a direct link to the Witch Trials. It was once the home of Jonathan Corwin, a judge who served on the Court of Oyer and Terminer, the judicial body that sent the accused to the gallows. salemwitchmuseum.com; thewitchhouse.org 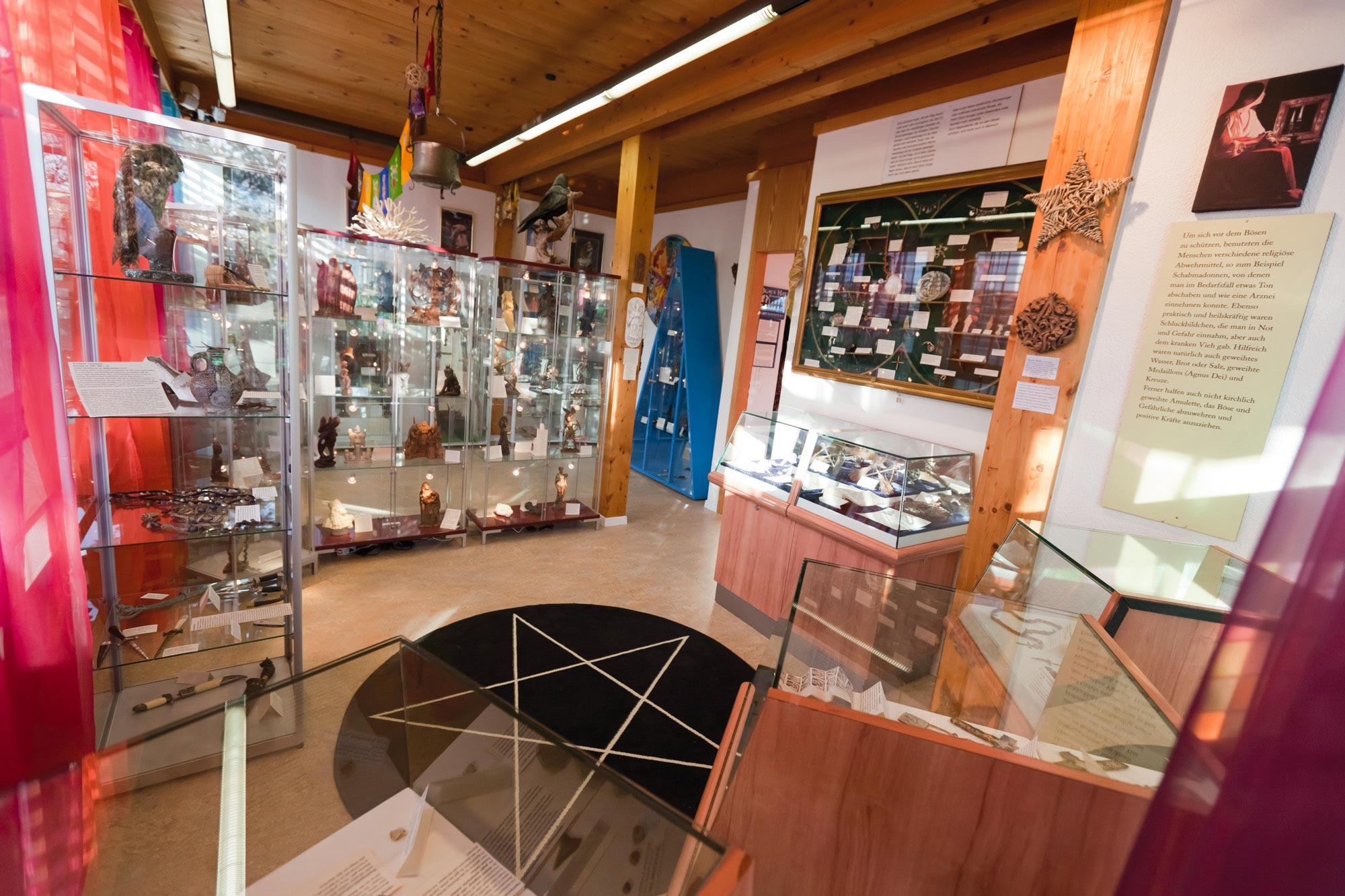 Unfortunately, witch hunts didn’t begin or end in Salem. The Hexenmuseum Schweiz presents an overview of the witch trials in Switzerland and Europe, while also delving into the history of magic from the Middle Ages onward and highlighting the distinctions between superstition and folk beliefs. Located in the grand Liebegg Castle, built in 1617 high above the surrounding valley floor, the museum ranges over six large, elegant rooms. They’re filled with more than 1,300 artifacts, including masks, maps, chalices, cups, photographs, paintings, and items related to divination, like tarot cards, Ouija boards, runes, tea leaves, and crystal balls.

Visitors will also find displays devoted to studies of familiars and other animals related to witchcraft, from birds of prey to wolves, as well as magical and medicinal herbs, amulets and talismans, and ghosts and other supernatural beings. Audio stations and a film room help tell the story of European magic makers; in warm months the museum, which was founded in 2008, features a labeled herb garden. On full moon and dark moon nights, Hexenmuseum Schweiz is often open for extended hours, with special programming offered throughout the year, including a Halloween dinner. hexenmuseum.ch 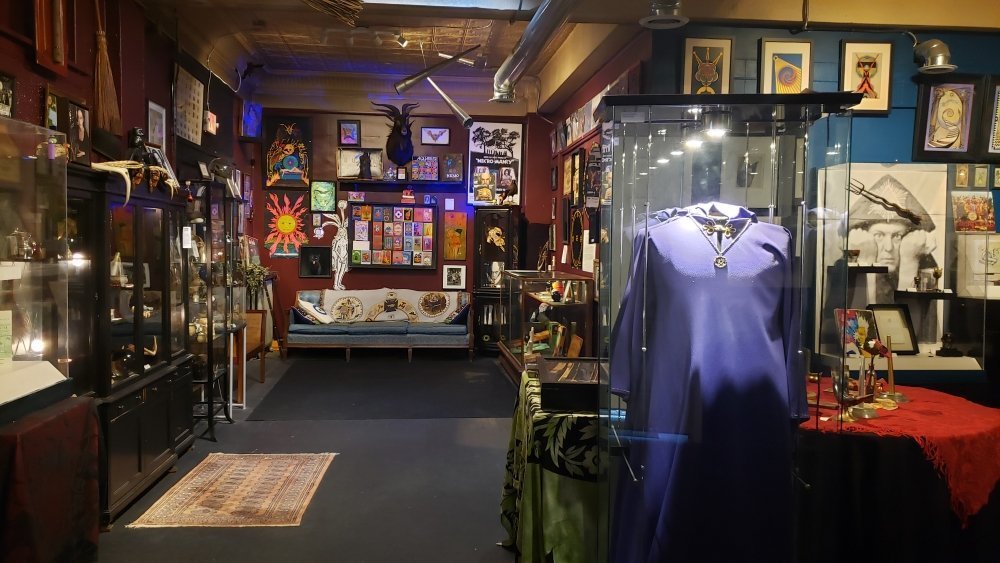 Home to one of the most important spell and sorcery collections in the United States, the Buckland Museum of Witchcraft and Magick is named for the man who began amassing it in 1966, after meeting with Gerald Gardner, the founder of Wicca. Raymond Buckland, who went on to establish one of the country’s first covens, worked for American Airlines, enabling him to obtain objects from around the world. He died several years ago, but his remarkable treasure trove of more than 200 artifacts and mementos remains.

Among the most striking are Buckland’s ceremonial robe and alchemy cards, ushabtis (Egyptian funerary figurines), Gardner’s horned pipe and besom, a wand owned by Aleister Crowley, a troll doll clad in hair and spikes, and even the “demon in a box” snared by Buckland in the 1970s with the assistance of a magician. The Buckland Museum of Witchcraft and Magick also boasts a large assemblage of newspaper and magazine clippings about Buckland and his colleagues and friends. The institution periodically hosts special events, like the lecture “The Latent Image: Occult Photography in Theory and Practice,” scheduled for October 17. bucklandmuseum.org 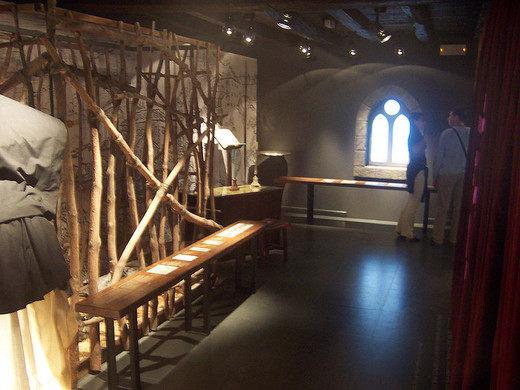 The small town of Zugarramurdi in the Basque region of northern Spain has the unhappy distinction of being home to the largest witch hunt in history. Museo de las Brujas not only bears witness to that shameful event; it is also a testament to the lives and customs of the people—often women herbalists—who were victims of it. During the Spanish Inquisition of
the 17th century, tales of occult rituals and activities like shape-shifting in a nearby cave led to as many as 7,000 people being accused of witchcraft in the area. Of those, 2,000 were investigated, imprisoned, tortured, and sometimes burned at the stake.

Founded in 2007 and housed in a former hospital, the Museo de las Brujas begins with videos about the region and the history of the 1610 witch hunt. The rest of the first floor tells the tale of the young girl who confessed the activities of her coven, an event that set in motion the witch trials, while the second level explores herbalism and spell casting. Witchcraft paraphernalia on display includes caldrons, the horned skull of a goat, and a book of spells. Every year on August 19, the Cave of Zugarramurdi becomes the setting for an annual celebration that attracts as many as a thousand people who come to feast on roasted lamb. turismo.navarra.es/eng/organice-viaje/recurso/ocioycultura/4040/ museo-de-las-brujas

An exhaustive and entertaining cataloging of 5,000 years of wizardry from around the world, Magicum is highly interactive, with opportunities for guests to draw tarot cards, peer into a crystal ball, and discover their own magical abilities with games, riddles, and puzzles. Located in the center of the city, deep in the vaulted cellar of a spectacularly renovated building erected in 1820, the museum presents magic shows some evenings, weekends, and school holidays, but the exhibits themselves are plenty enchanting. Objects of the occult are spread throughout a maze-like warren of rooms, with themes including astrology, superstition, alchemy, and religion.

The most popular displays feature depictions of animals believed to hold great power by Asian cultures, such as water buffalo and elephants; African masks used in rituals; a Chinese “lucky” bowl; shaman medicine vials; and a fanciful depiction of the study of the alchemist Nicholas Flamel. He was believed to have discovered the Philosopher’s Stone, which grants immortality and the ability to turn ordinary metal into gold. A special chamber is devoted to the breathtaking work of illustrator Ciro Marchetti, who creates artwork for tarot decks. magicum-berlin.de 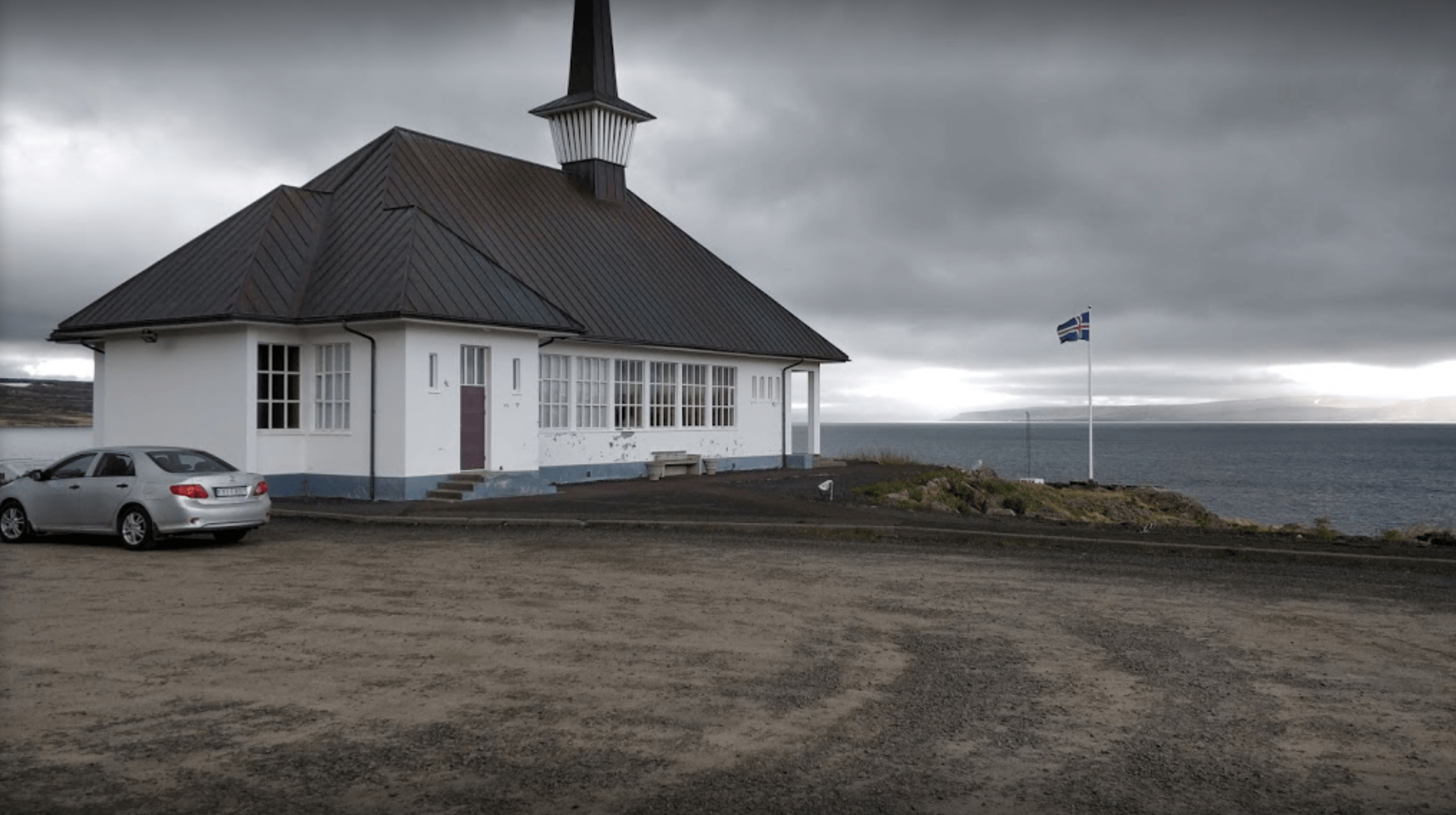 STRANDAGALDUR
(The Museum of Icelandic Sorcery and Witchcraft) Hólmavík, Iceland

A strong stomach might be required for at least part of a visit to Strandagaldur, which is home to a pair of “necropants”— a realistic replica of the complete skin of a man from the waist down, worn as a part of a spell to bring endless money to the person casting it. Other articles of the occult on exhibit include boxes of hair and wool, the latter said to have been used by witches to create demons; vials of blood; and reproductions of tilberi, creatures summoned to steal milk from neighbors. Wood carved with runes, a stuffed crow representing a familiar, animal skulls, and a blood bowl used to chat with gods are also a part of the museum’s displays.

But Strandagaldur, which sits in a small town in Iceland’s Westfjords, thrills most with its collection of authentic 17th century spells from the region. Rituals and conjurations for everything from invisibility to ruling the weather, catching thieves to creating zombies, can be found on scrolls, animal skins, and in spell books presented throughout. For those who can’t get enough of the folklore and history around Iceland’s sorcerers, the museum opened a second location, The Sorcerer’s Cottage, in 2005. galdrasyning.is