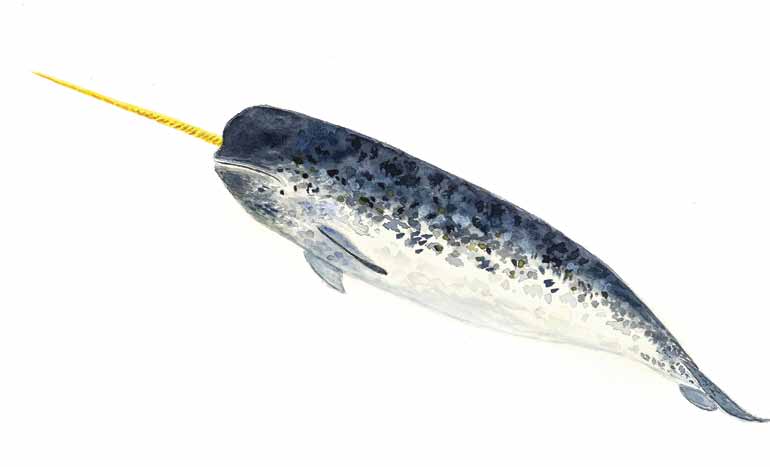 Monodon Monoceros: one tooth, one horn. Or one toothed unicorn. Narwhals are dappled grey whales that live in the Arctic, wielding nine-foot-long tusks. Their remote, icy habitat has shrouded them in mystery for centuries, weaving them into myth and legend.

Growing up, I thought Narwhals were make-believe. It wasn’t until a few years ago, in my college cafeteria, that a friend read a fact off a juice bottle that said: “a narwhal’s tusk is actually an elongated tooth.” I argued, saying that narwhal horns, like a unicorn’s, were made of pure magic. My friends all looked up from their food to stare at me, then burst into laughter. “Hannah, they’re real. Narwhals are real animals,” someone said. Someone else looked up some pictures.

I wasn’t the only one who mistook narwhals for something a bit more magical. Throughout the Middle Ages, Vikings sold the whale’s elongated tooth at markets. Presented as unicorn horns, or alicorn, the tusks became worth their weight in gold. Alicorn was said to have protective and magical elements. As protection from poison, it was carved into goblets and utensils for nobility. Churches ground the tusk into powder and mixed it into holy water. They promised ailing commoners a miracle cure.

In the sixteenth century, the explorer Martin Frobisher found a beached nar-whal. He took the tusk to Queen Elizabeth, and presented it to her as a unicorn horn. The queen paid ten thousand pounds for it, equivalent to the cost of an entire castle. Even now, the tusk is kept where the queen demanded: with the crown jewels. The tusks have been used by royalty all over the world. In Japan, two narwhal teeth cross at the entrance to the Korninkaku Palace.

The throne of Denmark is guarded, like the biblical Throne of Solomon, by silver lions, and the frame of the chair boasts spiraling, ivory “unicorn horns.” It is rumored that Austrian Kaiser Karl the Fifth paid off a large national debt with two of them.

As Europeans explored the world and became more familiar with its creatures, the unicorn theories died. Despite this new knowledge, the narwhal’s intrigue and mystery remained intact, and they became legends themselves. Their tusks could pierce ice, or better yet, impale ships straight through. What else could be their purpose?

The existence of narwhal tusks is one of the ocean’s great unsolved mysteries. The whales don’t use them to impale their food (how would they get it off once it was on?). There is only one known instance of a male using his tusk to defend himself against another narwhal. While the tusks may not have restorative or protective powers for humans, it was recently discovered that they are covered with sensors. These sensors may help them communicate with other narwhals or gather information, like the temperature and chemical balance of the water.

Narwhals aren’t mythical creatures that can rip apart a ship with one stab of their extra long tooth, and the tusks don’t have magical properties that can cure disease and neutralize poisons. The Inuits, whose lives have always been intertwined with the narwhal, call them Qilalugaq Qernartaq, meaning “the one that points to the sky.” They may not be unicorns, but there’s some magic in that.

Two years after finding out that narwhals are real, I got a tattoo of one on my left forearm. People often ask me why a narwhal. It’s to remind me that anything can happen, that magic exists right here, in our own world.