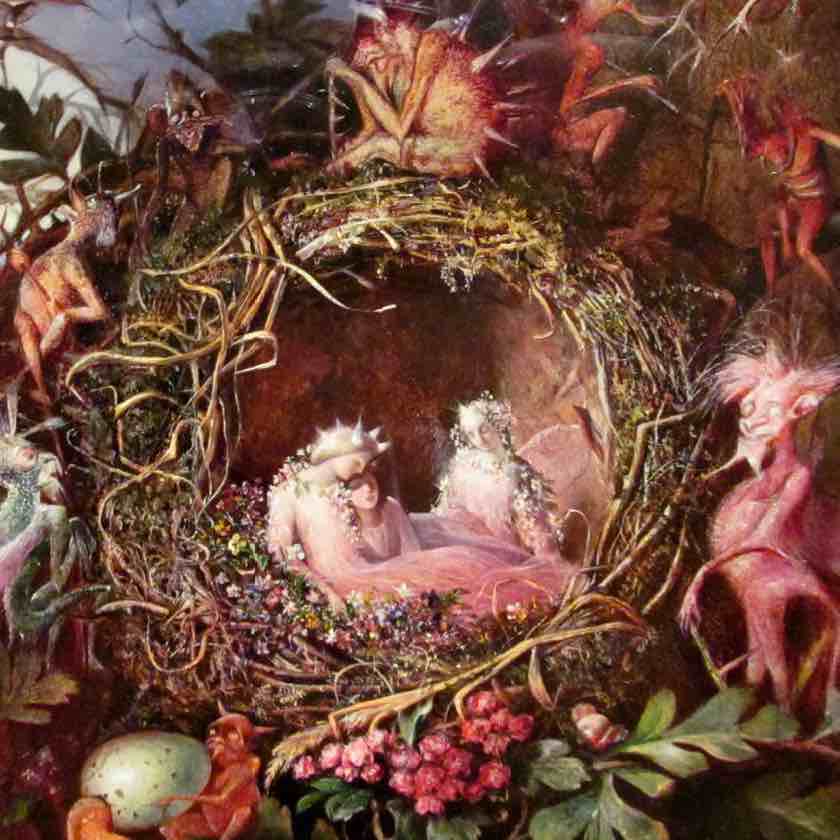 A small, angular face that reminded me
of a fox’s mask. Was it a mask she wore
the whole time I was with her?

The thing about faeries is, they’re not like us,
material. Indeed, they most resemble
assemblages constructed from our dreams.
Their visible forms are for our benefit.

Sometimes, as we lay together in bed
under a canopy of spider-silk,
I would turn and find she had become a tree,
branches for arms, a bird’s nest between her legs,
with three blue, speckled eggs. Were they our children?
I’d blink, and she would be a woman again,
yawning and stretching as human women do.
She’d smile at me with a fox’s sly, wise smile
as though she had tricked me.

The castle was sometimes made of rough gray stone
covered with moss, sometimes of murky water
with fish swimming in the walls. When we danced, the music
came from viols or the buzz of a hundred bees.
I sat on chairs that were either toadstools or clouds,
and ate from plates that stared back up at me,
blinking iridescent eyes. What did I eat there?
Air? Insects? Salads of delicate herbs?
The bread tasted like ashes.

Sometimes she loved me, and we would ride together
on robins, or was it flowering hawthorn branches
whose thorns would prick my legs through leather trousers?
With her strange retinue: the faerie knights
riding on weasels, the goblin standard-bearers
holding thistle spears. They were always half something else,
with the heads of toads or owls, a bat’s black wings.
Everything there was always half something else,
except the faerie women, wholly themselves,
and so luminous you had to look at them
through tinted spectacles. It was the fashion
to sew living butterflies unto their shoulders,
so they moved in a halo of colored dust
and panicked flapping.
Awkwardly, at the rear of the procession,
walked a stray cat she had turned into a boy,
who mewed and tried to scratch me.
I was mostly unhappy, but sometimes happy.
The problem is this: I would rather be unhappy in fairyland
than happy elsewhere.

At night, I lie beside a woman who never
turns into a tree, who bears me human children.
And all I can think of is her hard black eyes,
which sometimes looked at me with such disdain,
her small red mouth that never told me the truth
and laughed when I believed her.
That fox’s face, which was probably always a mask.

Sometimes I go into the forest alone
and whisper into the hollow knot of an oak:
I’d rather spend an hour in fairyland
than a lifetime elsewhere.
Then I stand in the green silence, with only the cries
of birds, the shush of the oak leaves high above,
and wonder if she’s listening.