Home Creative Art The Daydream of a Monk 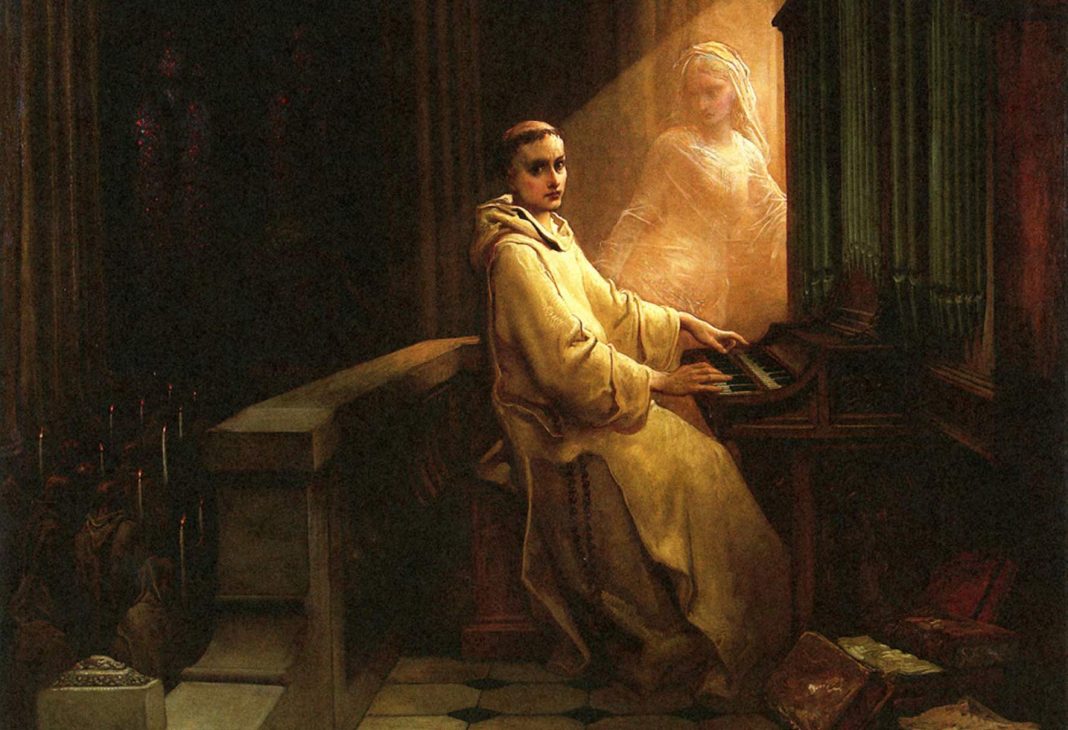 Above an Empire sofa in our master bedroom hangs a huge 19th century etching. We salvaged it from an attic before a family house was sold. It’s hard to tell if the work was always meant to be so dark or if age has accelerated the effect. While we knew the old print was by Gustave Doré, one of the pre-eminent Romantic artists of the 19th century, it is such a dark and gloomy piece that, except for some evidence of Gothic arches and a curiously vacant if beneficent face in the center, the art slapped into its gold frame largely looks like an over-inked old newspaper. A page that got caught in the rollers and went through four dozen times, till there was little more than black smudge from margin to margin. For a long time I thought the subject was a young woman wafting about in some vaguely Gothic environ, but one day, in a zealous fit of Windexing, I studied the image more closely.

The figure is not a female but a young man with a sensitive, provocative expression on his narrow face. He could be a descendent of some patriarch of El Greco. The look is neither castigating nor frightened—indeed at first I found it a little suspiciously beautiful, with almost a come-hither openness. Then I realized the man has taken the robes of a religious order and is sitting at the keyboard of an organ in a chapel.

In his career of some thirty years (he died at fifty-one), Doré illustrated works by Milton, Poe, Coleridge, and Shakespeare, among others. He is best remembered though for his illustrations of the fairy tales of Charles Perrault, the monstrous landscapes of Dante’s Inferno, and of Cervantes’s Don Quixote, which, like Tenniel’s depiction of Alice in Wonderland, supplied the definitive image of the protagonist in our minds for all time. If Doré’s claustrophobic interiors may have been influenced by Piranesi, his grotesques and beauties and the savage landscapes of Dante’s Hell are all his own.

In this age of library closings, easy access to biographies of Doré and to critical appreciations of his work and influences are hard to come by. I might never have become interested in our own print, but one morning in high summer, I woke to see the morning sun slicing through leaves of the maple tree outside my high-placed window and lancing across the bed to spotlight the young monk at his ministrations upon the keyboard.

The effect was arresting, and these simple phone snapshots (above) catch the moment of brilliance. It took the gift of a shaft of natural light to reveal that the piece itself was about hidden light in tenebrous environs… Our family heirloom seems to be a print derived from—or perhaps inspiring?—Doré’s painting called Le Rêve du Moine—The Daydream of a Monk. In the images available online of the painting, one can see details much more clearly. Behind the monk stands a ghostly female figure, diaphanous and diagonalized, though not clearly an angel—no wings or halo to her ensemble. Below the staging upon which the monk sits and looks at us is a procession. His brethren carry lighted candles past the lectern and up the nave of the cathedral toward the choir and the altar. I’m not sure if the added details in the painting improve the mysterious effect or sentimentalize it. One thing I do feel is that the face of the monk in the print, more stylized than the more human face depicted in the painting, more aptly catches the transcendence of spiritual emotion. At least for my money.

In hunting to see what else I could find of Doré’s work on this subject, I came across a painting called The Neophyte. This is a monk at the very start of his career. The model is clearly the same young man as that in our etching at home. The central figure, a sensitive and innocent young man at the start of his life of devotion, sits in the center of the painting with an almost Christ-like serenity, addressing us from the center of the mise-en-scène. To my eye, his elongated jaw and unsmiling but not unkind expression beckon viewers toward the mystery of devotion.

But could the paintings perhaps be critical in intent? Doré seems to have provided some images for George Sand’s devout but anti-clerical novel Spiridion. Its central character, a novice named Angel, is haunted by the spirit of the abbot Spiridion, who founded the establishment and is disturbed by how the current monks have fallen away from the truth. According to a reference on a website, Doré is said to have quipped of the young novice, “He’ll be over the wall tonight.”

I have always turned to those Romantic painters who could make the ineffable tangible. My first rapture before a series of paintings happened while I was in grade school, when Thomas Cole’s four-painting sequence The Voyage of Life was exhibited at the Albany Institute of History and Art in Albany, New York. This popular quartet of paintings featured terrifically rendered landscapes couching his metaphoric subject. A figure sets off on life’s journey in a golden barque on a sunny morning, survives travails and storms, and drifts peacefully in a much abused vessel toward a sunset promising rest and reward. That landscape could embody spiritual or metaphoric meaning was a new concept for me. This fueled my interest, in time, in the works of Turner, Whistler, and eventually the shimmering transcendences of Monet’s waterlilies and the haunted night-scapes of Samuel Palmer. Not to mention great 20th and 21st century children’s book illustrators—Arthur Rackham, Maurice Sendak, Shaun Tan, Charles Vess, and Chris van Allsburg among them.

The artists of the Renaissance had given us lasting monuments of sacred subjects in idealized and fully realized settings. These were paintings to increase devotion as well as confer aesthetic joy. But it was Doré who, as the pre-eminent French illustrator of his day, chose to address transporting texts of non-Biblical magic and legend with impossible images of ironclad solidity. Maybe Thomas Nast, giving us Santa Claus in the newspapers, is Doré’s only rival, until Picasso came along and turned up a new Don Quixote and Sancho Panza—an image that nods respectfully to Monsieur Doré. We owe much of our sense of otherworldliness in 19th and 20th century fantasy to him because Doré showed us how real it could actually look.

My 2015 novel After Alice follows a character named Ada—who is referred to in one sentence in Lewis Carroll’s immortal Alice in Wonderland. My Ada, tumbling into Wonderland herself, thinks about an illustration of another underworld that she has come across:

She saw … a dense and beautiful crisp illustration from that collection of Doré’s engravings for The Inferno: specifically, Plate 10 from Canto III. Charon supervising the embarkation of sinners in a boat on a dark lake. Unlike Ada, the sinners were magnificent human specimens, swollen into adult sensuousness with citrus-round breasts, if female, and mathematically beautiful abdomens and buttocks, if male … Still, it wasn’t the divine bodies of sinners that Ada now recalled, but the netherworld itself. Beyond the slopes of scree, Doré had limned a black sky pasted across with blacker, underground clouds. The landscape looked like certain sections of Cumberland she’d seen once on a family mission of mercy … But Ada couldn’t figure out Doré’s sky under the earth, a sky that wasn’t a heaven. It must be a holy mystery … The Romantics thrilled us in holy mystery, and thrill still.