Home Writing Mythology The Other Side of Abundance 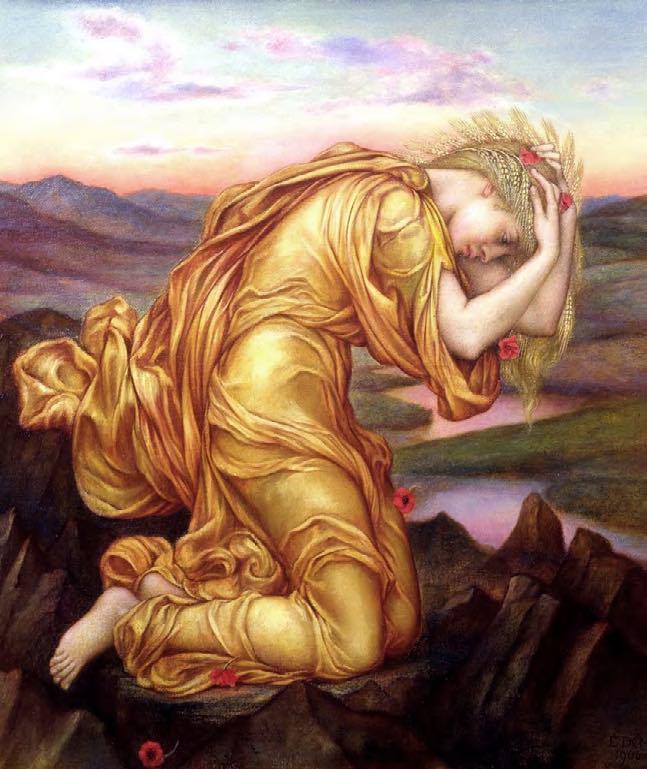 The most famous prayer to the greatest goddess of abundance the world has ever known is the Homeric Hymn to Demeter. This prayer-hymn, which tells the central story of the goddess Demeter, was influential enough that it became the fulcrum around which the ancient secret Eleusinian Rites revolved. We still know very little about these rites, but what we do know is that Demeter’s story, as related through her hymn, was central to them. We also know that some of the most illustrious and influential people of the day were initiates in these rites—names you’ve heard of, like Socrates.

The hymn opens in a flower-strewn meadow—the perfect picture of the wild abundance of spring. Here is Demeter’s daughter, Persephone “of the lovely ankles” and “low-slung girdle.” Here is the heady-scented, pollen-filled air. Abundance everywhere. But then the plenitude is interrupted by the Lord of the Underworld, Hades, capturing Persephone as his own. Suddenly the prayer to the great goddess of abundance becomes a hymn of grief and loss, one that takes some strange turns and eventually finds resolution in the striking of a bargain as a juicy pomegranate seed is crushed between pearly white teeth.

What does it mean that the goddess of the harvest, the goddess of plenty, she who was known to “boost all verdure in the world,” is best known and praised in a story that is not about gain but loss? This is the crux of the Hymn to Demeter: The testament to her greatness is illustrated through her ability to deprive.

Once the goddess of abundance realizes that she has lost her beloved daughter and understands that no god or divinity is going to step forward and help, she begins to pull away her power. The land goes into drought, the flowers and fruits wither on the vine, and the people cry out in sorrow. Even mortal women have a hard time conceiving, and when they do, the births are harder. It is not until Hekate, a Titaness who is older than all the Olympian gods and goddesses and the patroness of magic, tells Demeter that she saw the abduction of Persephone that we see there is a journey to take and the possibility of hope and restoration at the end of the story.

When we think of goddesses of abundance today, we think of the more benevolent face of the goddess, a holy helper that looks on the land and all creatures with love and bestows blessing. We catch her movement in the unfurling of a rose, the slowly ripening cluster of grapes on the vine, the golden sheaths of wheat, and ears of corn waving in a late summer breeze. We find her too in the clinching of the deal, the gaining of the promotion, the fattening of our bank account, or the development of a skill or talent.

Abundance goddesses do not just bring good things into our life and the world; they are also traditionally patrons of cities and large civilizations. Grain and cereal crops, which most harvest goddesses are associated with, were key to our earliest human settlements. Harvest goddesses are not just bringers of life; they are also builders of culture and connection. Even today we spend much of our time sowing intentions, growing our dreams and ideas and imaginings into fully furled possibilities, ensuring that these seeds have the proper environment to mature fully. And then, when the time is right, we harvest that fruit and let it nourish us and our lives and loved ones. A single seed extends far beyond one individual.

The harvest revolves around an ancient paradox that we see in Demeter’s hymn. The height of abundance is also the precise moment when the scythe is being sharpened to make the first cut. To appreciate abundance means being aware also of loss, grief, and the ways to navigate both. For many of us, this has been a year that has illustrated this truth more powerfully than others. Every joy and pleasure we have experienced this year has been made sweeter in contrast to what we collectively and individually experienced the year before. It is not that one “causes” the other, but rather that they are sides of the same coin. The other side of abundance is loss. This is what we learn from Demeter’s tale.

This is perhaps the greatest blessing of the old harvest goddesses. They are not only with us when times are good, but even more likely to walk by our sides when we descend into our own underworlds. They know the terrain well and know how to call sweet life back up to the surface. They will remind us as many times as needed how to find abundance, especially when we are standing neck-deep in loss. Demeter has been there too, and as her story promises, all will bloom again once more.