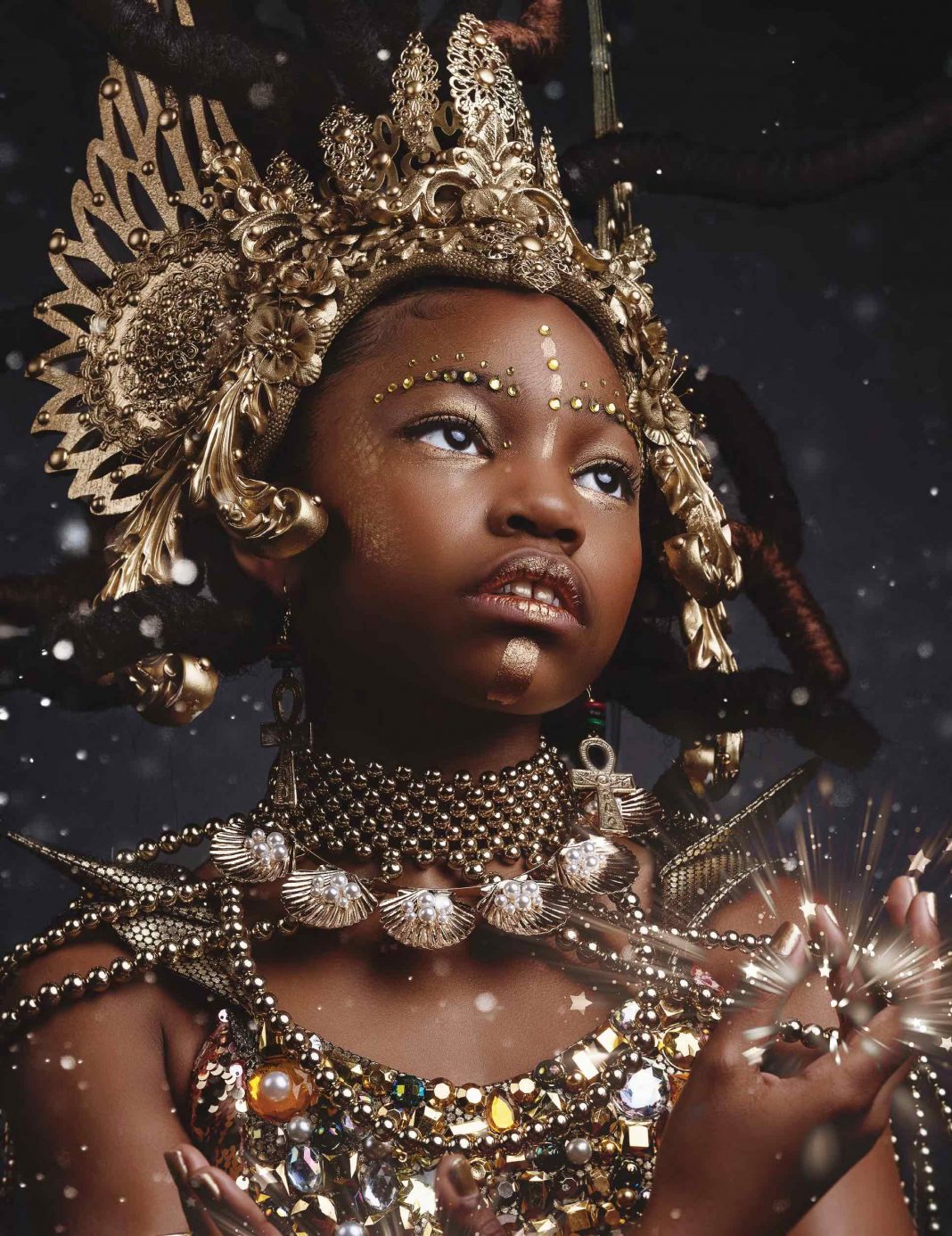 Husband and wife photography team Kahran and Regis Bethencourt met in an online graphic designer forum and fell madly in love, then started working together and bringing that love into their work. Just look at these gorgeous, celebratory images of children at their most joyful as they transform into their most magical, regal selves, bedecked in beads and shells, gold and butterflies and blooms, their hair streaming above their heads like elaborate crowns.

The couple entered the kids’ fashion industry in 2013, figuring they could be more creative there, and quickly realized that it was not only not very diverse but that almost all the Black children they encountered had straightened hair. Parents considered it a necessity. Kahran herself had had her own natural hair straightened when she was six and never even knew what her natural hair looked like until she was in her 20s. “You’re taught at an early age that your own natural hair is not acceptable,” she says.

So she and Regis started doing a few personal projects featuring children with their natural hair and then, in 2017, decided to showcase those images in a series called AfroArt, which captures the beauty and versatility of Afro hair and empowers children of color to embrace their natural curls and the skin that they’re in. “We don’t want to just question traditional standards of beauty,” they say. “We want to shatter them.”

For the series they travel to various cities to hold photo shoots, announcing their itinerary ahead of time and letting parents book mini sessions, each of which has a theme that is revealed only that day. When I spoke to Kahran, she and Regis had just returned from Chicago, where the theme was celestial; Miami, where the theme was cowrie shells; and Orlando, where the theme was Disneybounding (doing modern takes on classic Disney characters). They travel with hair and makeup people and an endless array of accessories and clothes, and the kids have one giant dress-up playdate.

Kahran talks of one mom from the Miami trip who emailed her later. Her daughter London was so enamored with her hairdo—a braided, foot-tall bun laced in cowrie shells with a gold headband and braids cascading down—that she refused to take it down. The mother sent a video of London in the grocery store, rocking her new look, which she also begged to wear to school the next day. “I said if you wear that to school, someone will have to carry you in on a throne, ’cause you’ll be super royal!” Kahran says, laughing.

On a trip to Europe, the couple photographed a young girl who was living in Germany and insecure about her natural hair. Her mom decided to surprise her with the shoot to encourage her to embrace it. “At the end of the shoot she had the biggest smile on her face,” Kahran says, “and her mom talked about how she proudly walked into school with her Afro hair the next day. Moments like that remind us of our mission.”

Their book Glory: Magical Visions of Black Beauty—“an exquisite pictorial love letter to Black children around the world,” Kirkus called it—was released last year and became an instant New York Times best seller. The book features children from around the world; the couple traveled to Kenya, Ghana, “all different places,” finding kids through social media and word of mouth and telling their stories.

Kahran and Regis are based in Atlanta, where parents can book custom sessions and give their kids the shoot of their dreams. Parents fill out questionnaires and the couple goes all out to play dream makers for the kids. “To us, fantasy is for everyone,” Kahran says. “We always say that if there is no lane, create one. If you feel that something is lacking in the fantasy realm, do your own thing and create it.”