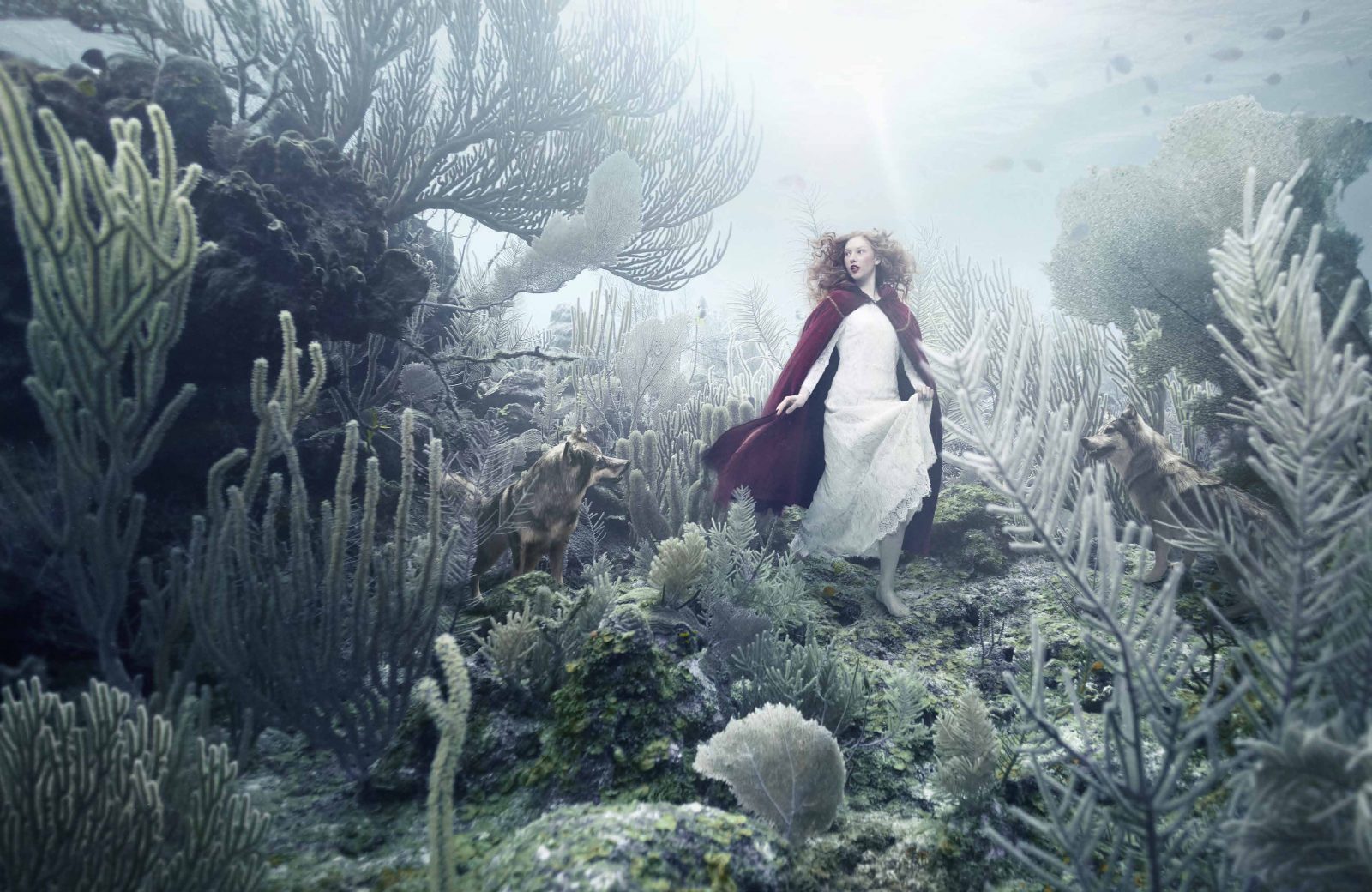 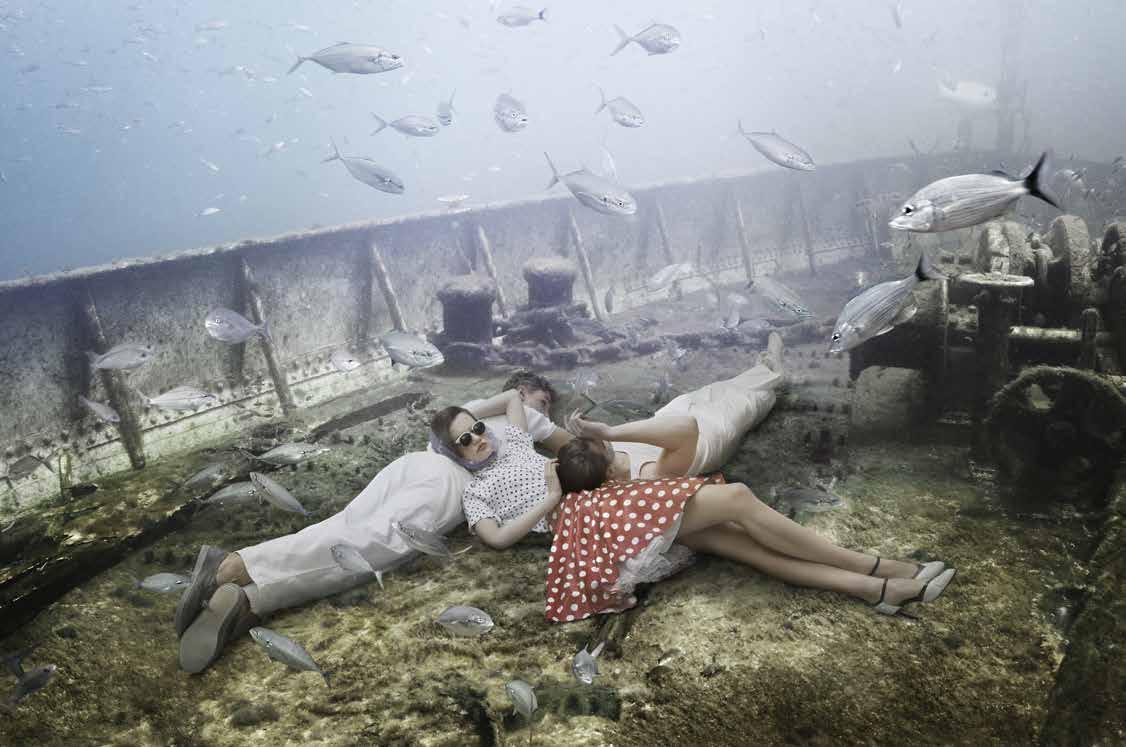 Austria native Andreas Franke is not only an avid diver and long-time professional photographer, but a magician who conjures his own worlds. After photographing the Austrian shipwreck Baron Gautsch several years ago, he loved how the resulting images captured a mystical underwater world filled with mystery and stillness. “I love to shoot underwater,” he says. “The visibility underwater creates this lyrical and mystical atmosphere … I feel far too many people don’t know what they are missing, how beautiful it is down there.” Still, he felt like something was missing from the images he was taking. “Was it the very peculiar emptiness?” he asks. “The tragic stillness?” He started to think of these underwater scenes as wonderful backdrops for vignettes he could produce in his own studio. His new goal? “To create a world that had never existed before. My world. My own little sinking world.” 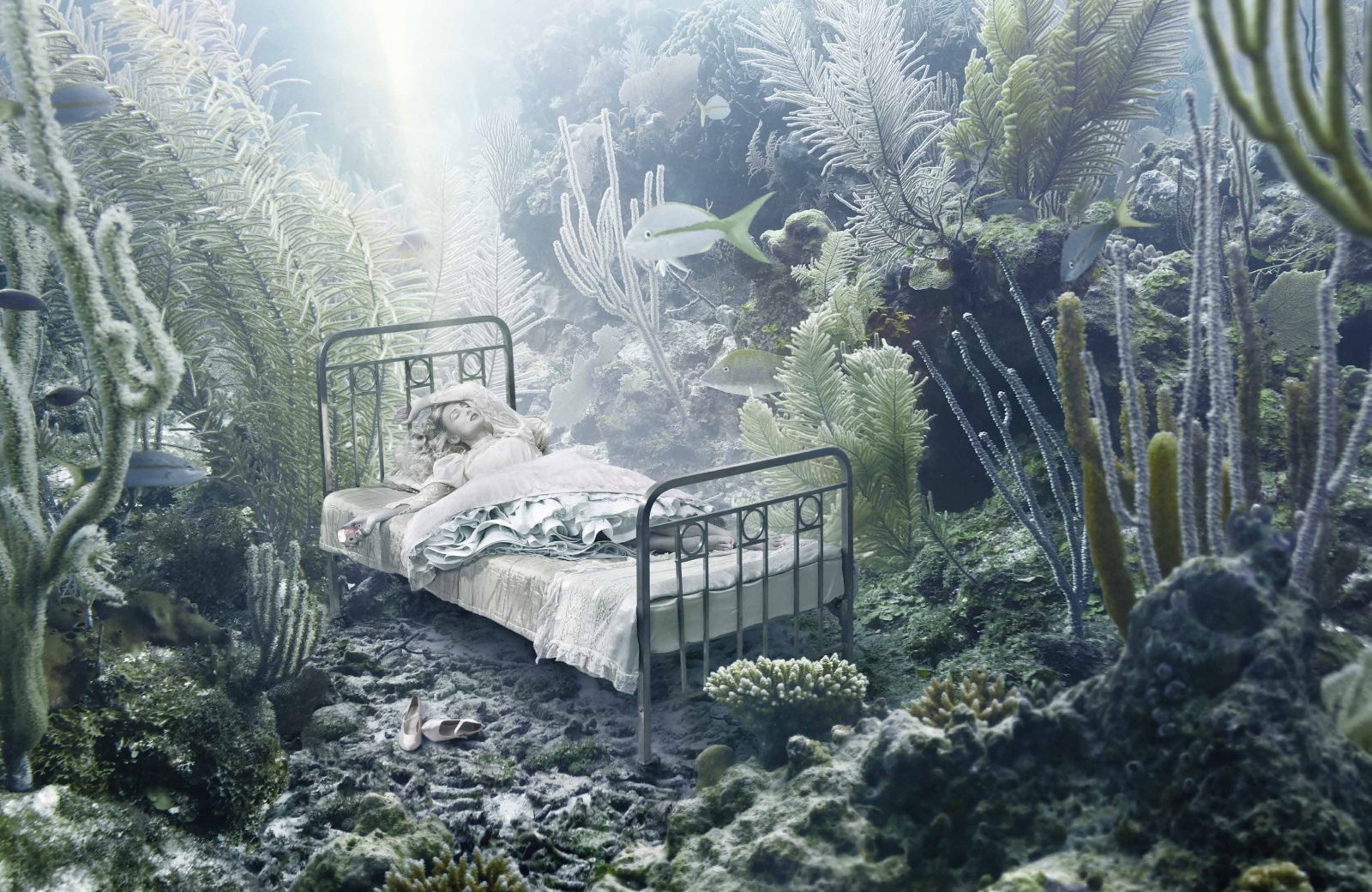 After creating his first enhanced underwater images, Franke took the experience even further. Since the images he created were about juxtaposing the world on land with the mystery of the ocean, why not make the shipwreck itself his actual exhibition space, too? The logistics of the idea were challenging. With the assistance of Joe Weatherby from Reefmakers, he created a test image and attached it to the actual wreck of the Vandenberg with strong magnets. The team received a green light from the authorities, and debuted the first underwater exhibition in August of 2011.

And the ocean left her mark. Sub-merged for four months in the underwater exhibition, the images became covered in a patina of salt and algae, which made each finished piece a true cooperative work between the world above and the world below. Franke loved the effect. “I knew that months in salt water would leave some traces on the pictures,” he says. “But the fact that the result would be so expressive and—in my opinion—of such artistically precious value, that really surprised me.” 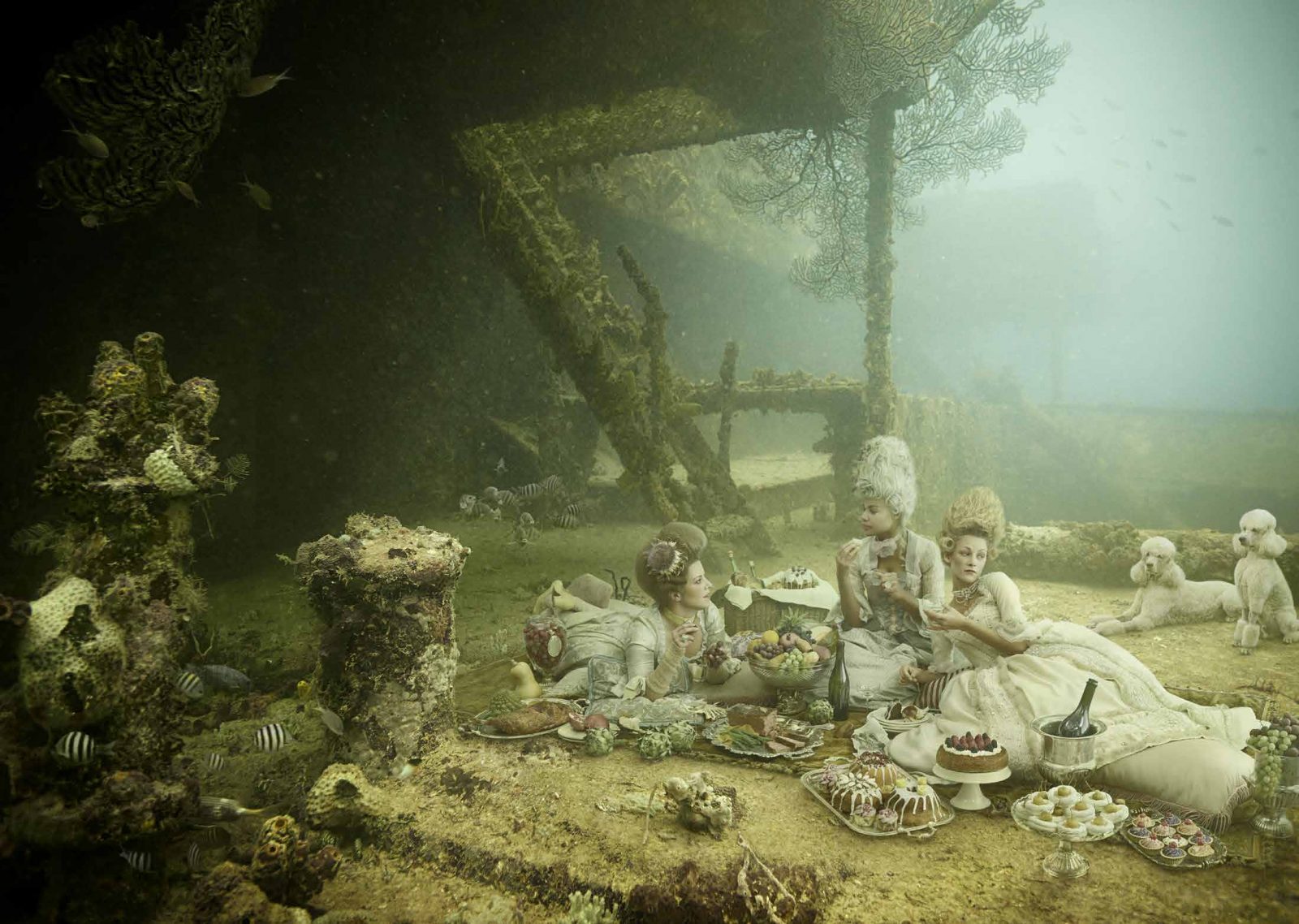 I took hundreds of pictures. And gradually, my concept of making photographic montages by matching staged photography with shots of submarine wrecks was taking shape.

The subject matter of some of the scenes from Franke’s work appeared to him instantly as he was diving at the wrecks, while others were inspired by the images once he came back to land and looked at what “backgrounds” he had photographed for his staged scenes. While one wreck might inspire him with its majestic silence, another (specifically the SS Stavronikita) inspired him as a symbol of life’s “irrepressible avidity” and “submarine ado.” He decided to pay homage to this vitality by pairing images of this ship with Rococo scenes—“this age of decadence with all its intoxicating extravagance, its vanity and disdain … The wreck full of lavish life demanded a match as overflowing and abundant as Rococo.” 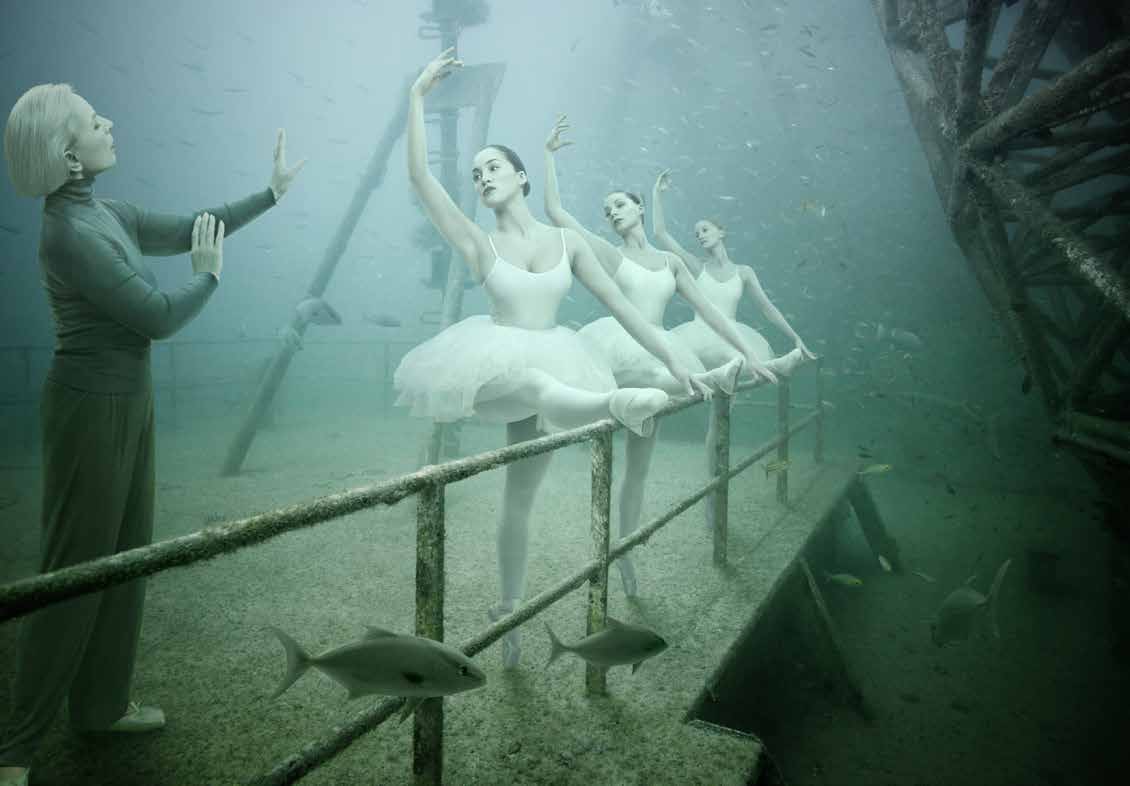 While some of Andreas Franke’s exhibitions are inspired by bygone eras, others could be scenes ripped from daily life. Ballerinas practice on a barre coated in coral, a little girl catches fish with a butterfly net, and a group of young adults mingle outside a “cinema” that’s rusted and silent as small fish dart around their legs and faces. No matter how mundane the inspiring image from above the ocean, each scene becomes delightfully surreal transmuted into its ocean home.

Something about the photos of the wreck captivated me so much that I could not stop thinking about them. I was completely fascinated by that mystical underwater world. 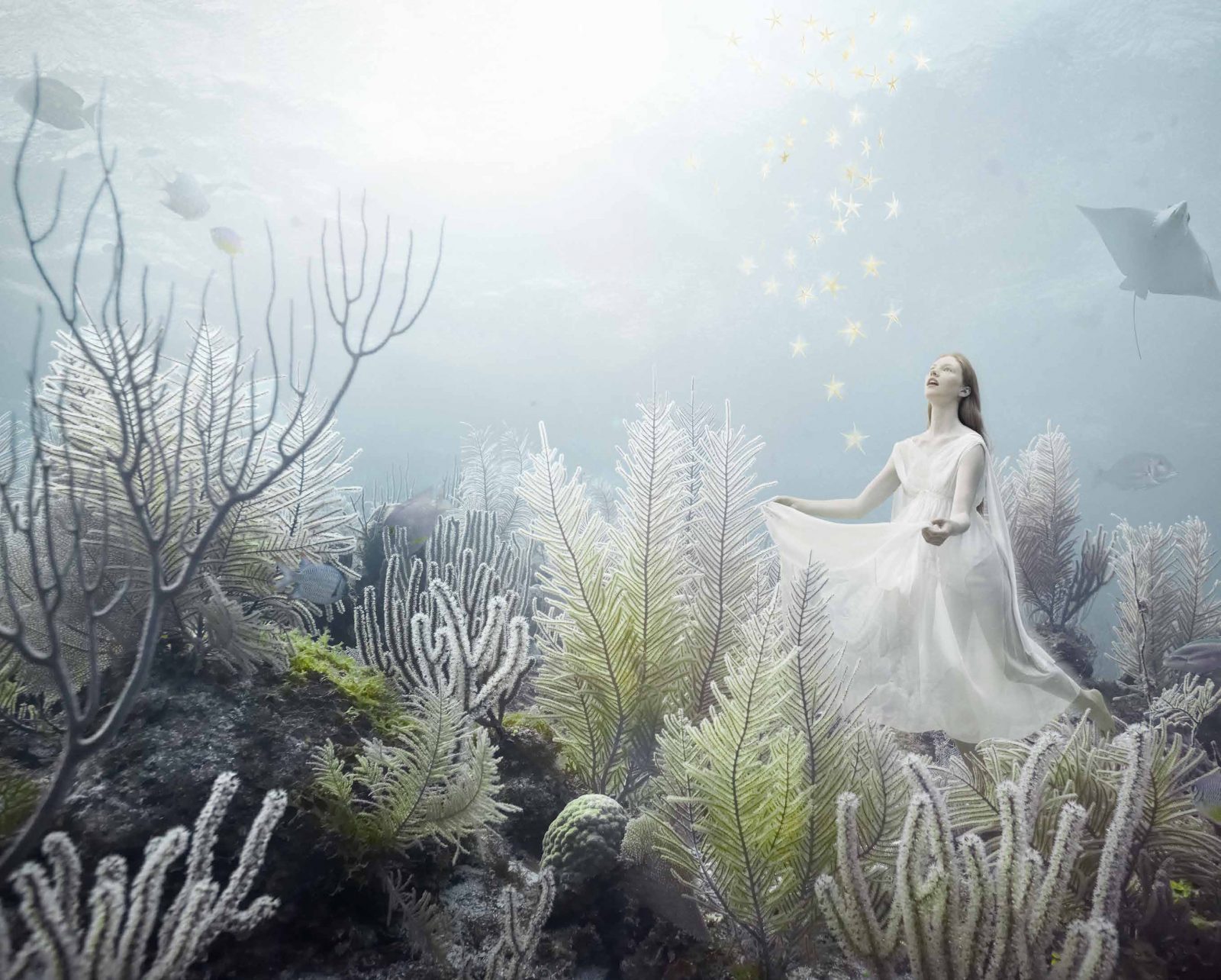 In his latest exhibition, Phantasy Fairytale, Franke draws inspiration from the Snow Queen, Little Red Riding Hood, Snow White, and other fairy tale characters—all superim-posed against the backdrop of the Caribbean Sea. “I was looking for a new theme,” he says, “and it was easily found as to me [the underwater world] looked like an enchanted forest, a fairy tale wood.” He displayed these works among the coral reefs and underwater animals in the Per AQUUM Resorts underwater music club and spa in the Maldives. By now, Franke has visited wrecks, and oceans, all over the world, and has no plans to stop. “I want to create some imaginative visuals one hasn’t seen before,” Franke says. “Images [that appeal to] the observer … and hopefully stimulate and inspire one’s imagination and fantasy.”

“With me around,” he adds, “no wreck is safe anymore.”