Open an antiquarian book and there’s a good chance you’ll find marbleized end papers, hypnotically patterned swirls of colors created by floating pigments on water that has been thickened with cellulose—one early recipe included seaweed—upon which you lay a sheet of paper.

The history of marbling has been called misty and obscure, and early names for the art sound nearly mystical. It was known as suminagashi, or “ink floating,” in 12th century Japan (it replaced earlier hand-colored marbled effects in Ming Dynasty China) and ebru, or “cloud art,” in 15th century Persia.

The technique traveled to the West along the Silk Road (it still flourishes in Venice and Florence—it’s hard to resist picking up a marbled journal and a dip pen in an Italian paperie) as Europeans in the middle of the 16th and 17th centuries picked up the exotic papers in Turkey, Persia, and other parts of the Near East. The mystery surrounding how it was made was part of its arcane charm. Even scientists and natural historians pondered how paper could be made to look like marble. According to Richard J. Wolfe in his illustrated book Marbled Paper: Its History, Techniques, and Patterns, “the process seemed to possess mystical, almost magical qualities that placed it within the realm of alchemy and this aroused their curiosity.”

Marbled papers were widely used in Europe in the 18th and 19th centuries by bookbinders. (That sheen or finish you see was often achieved by buffing with beeswax.) Not surprisingly, the patterns had names. The French curl or Snail pattern, introduced around 1660, was used in Britain until the end of the 19th century. A fine-combed pattern called Nonpareil was popular throughout the Victorian period, along with variations called Bouquet, Peacock, Serpentine, and Dahlia. A book was a treasured object, and many early 19th century authors from Ouida (pen name of Marie Louise de la Ramée) to Jane Austen to Lord Byron had books with marbled covers.

The art was once a secret, which nearly led to its extinction. But now you can DIY and create patterns using combs, rakes, and feathers (please use only those you find in nature to be sure they are fairy friendly and cruelty free). Galen Berry, one of the best-known contemporary marblers in America, has made an art of naming his patterns, which include Bird Wing, Whale Tail, Frog Foot, Fantasy Moiré, and, most fanciful of all, Dragons in the Sky.

Until the middle of the 19th century, the enchanting paper was also used decoratively as wall coverings, trunk and musical instrument case linings, box coverings, and of course, writing journals. Indeed, marbling seems to make any object more magical. Happily, the marbling mystique endures and swirls of mesmerizing patterns ornament everything from teapots to candleholders. 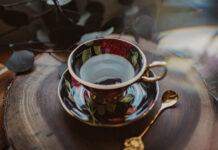 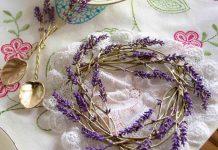