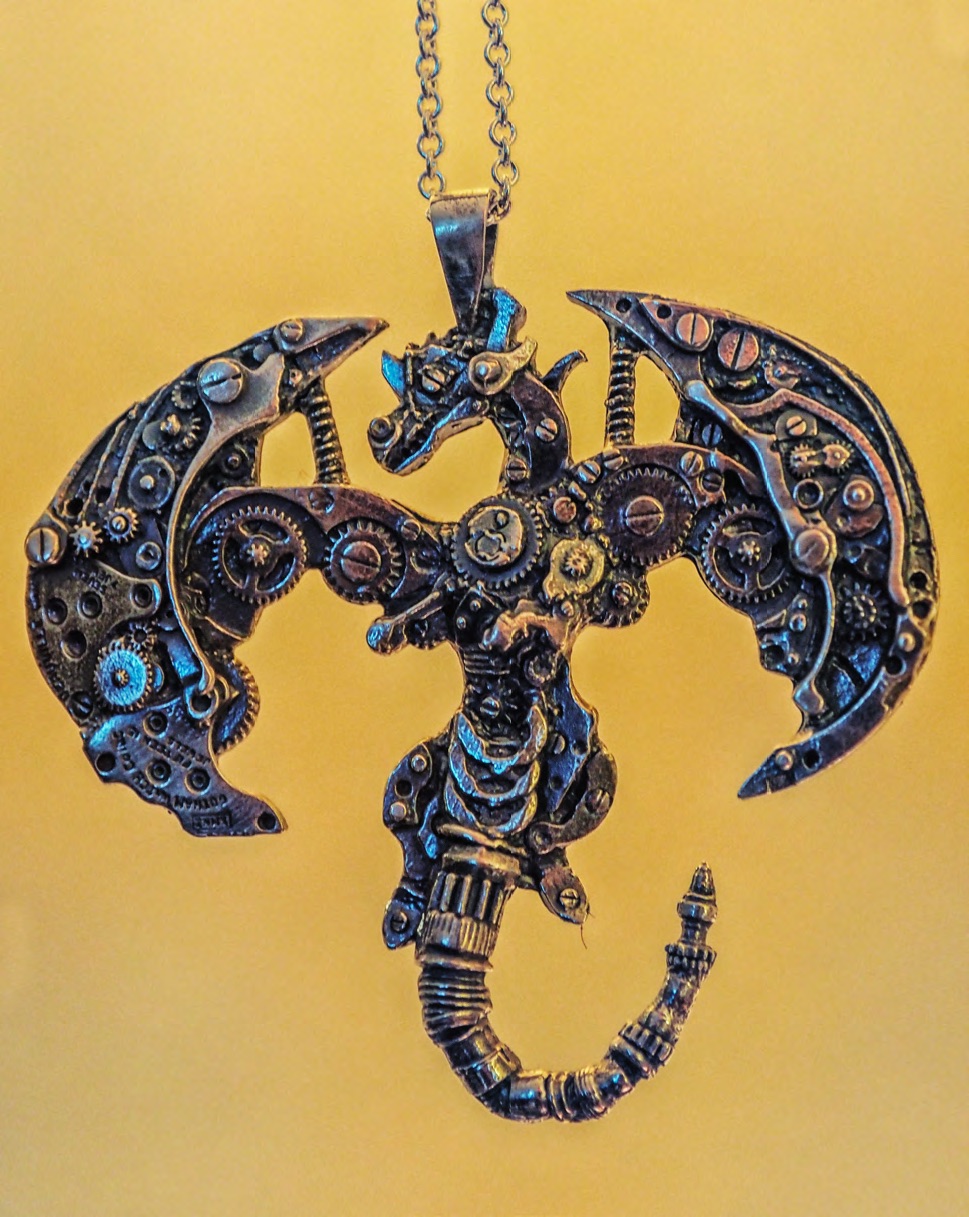 They don’t necessarily feature precious gemstones, the material needed to ensure safe passage back and forth through the centuries in Outlander, but Sue Beatrice’s pocket-watch sculptures are every bit as concerned with time as the blockbuster books and series. The sculptor, who fashions her micro-miniature pieces in a Sea Cliff, New York, studio filled with the antique timepiece parts she uses to create her art, spent her formative years tinkering with the old, busted watches her grandfather kept in a box. Rather than actually tell time, however, her work today presents Lilliputian scenes set in pocket-watch cases that are sometimes whimsical, sometimes poignant, and often both.

According to Beatrice, these sculptures all share the central, if subtle, theme of time—or more precisely, the passing of it. “The watches that I work with are designed to last,” she says, “which is the opposite of everything we have now. Our iPhones are good for a year and a half before it’s time to upgrade. Everything is plastic and disposable and temporary. I think the more I worked with these watches, the more I began contemplating what time means, what heirlooms mean.”

“I felt like I could create an art form that could be passed down through generations and maintain that heirloom quality.”

After a pause—just a slip of time, really—Beatrice adds, “I felt like I could create an art form that could be passed down through generations and maintain that heirloom quality. And I also felt that it spoke not only to timelessness but also to the brevity of life. All the people who created these watches that I admire so much are long gone, generations gone. I think of who owned them, who looked at them daily to tell what time it was. It’s fascinating to me to think about all that has passed in the time since this piece was engraved and this chain was made. It makes you contemplate what’s important.”

Crafted only by commission, Beatrice’s pocket-watch sculptures can take months to make as she waits for the perfect parts to appear. They find their way to her from a variety of sources, including estate sales and eBay, and from countries as far-flung as Romania and Argentina. Her only caveat is that she will not use working timepieces or even broken ones that might be repaired because, as she says, “I respect them too much.” Instead Beatrice seeks corroded movements and cases, items she knows can never again be used for anything but art. 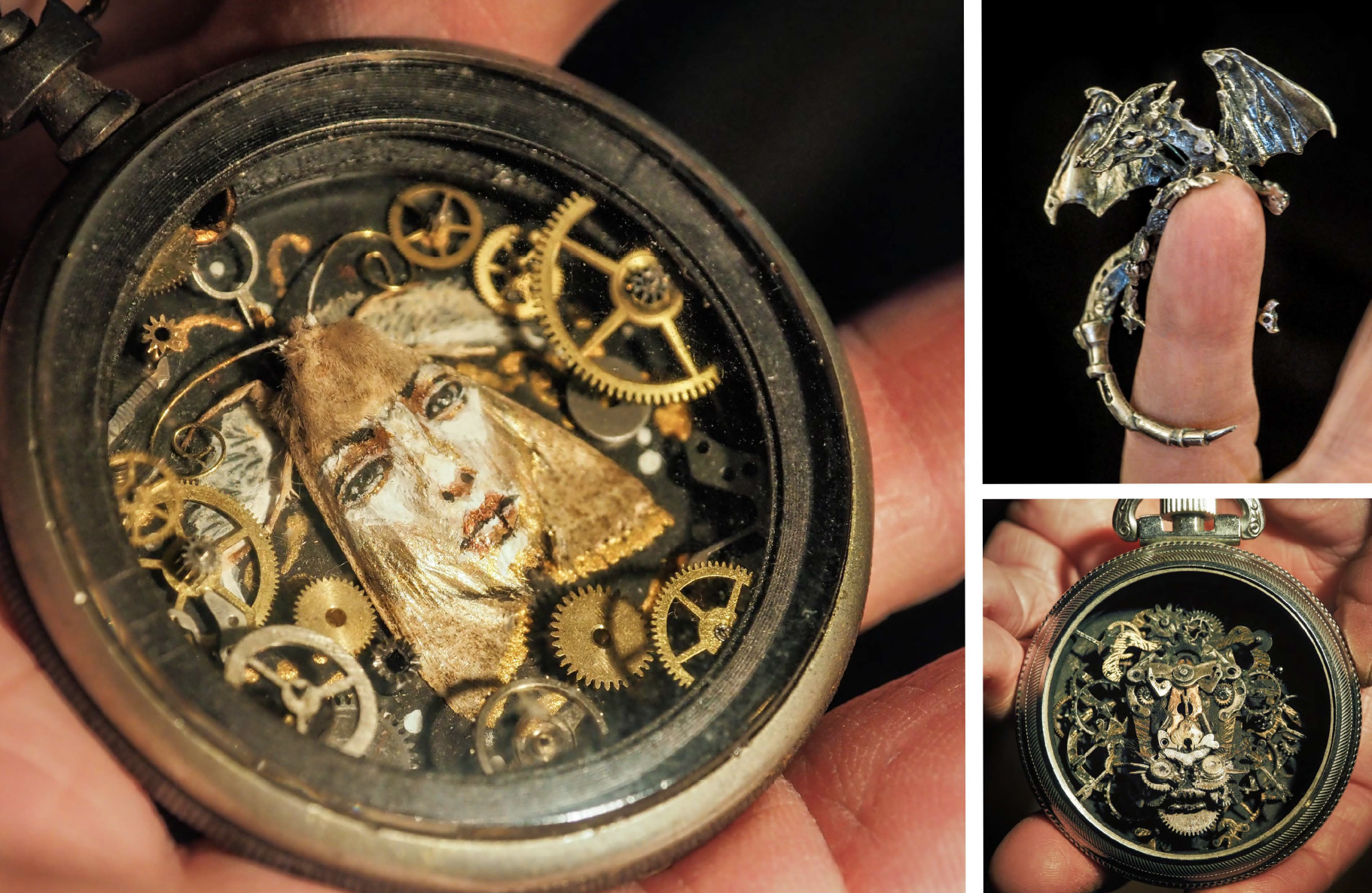 She also looks specifically for watches and watch parts created before 1850. “I’ve discovered that items that were made prior to mass production are truly exquisite,” she says. “Because they were handmade by the artist, they were engraved inside, they had beauty to them and a patina on them that just couldn’t be matched by anything that was made in the past century and
a half.”

Beatrice’s clients usually approach her knowing what scenes or items they would like her to re-create, though the artist says she has “complete creative control in how to get there.” They range from besotted hobbyists’ objects of affection, including sailboats, motorcycles, and World War II–era biplanes, as well as more sentimental subjects, like dearly departed pets and, in one especially moving case, a father holding his young daughter’s hand as they journey together through life.

“The little girl represents both the woman who commissioned the piece with her father and her young daughter with her grandfather—the same man,” Beatrice says. “The background is somewhat abstract with whirling gears and watch hands that appear to point the way. Perspective lines pull them forward into unknown, magical realms. The little girl’s favorite red shoes were created out of watch rubies. This sculpture was both a celebration of the continuity of love through generations and a gentle reminder of the passage of time and how precious those moments are. The recipient was very touched by the piece.” 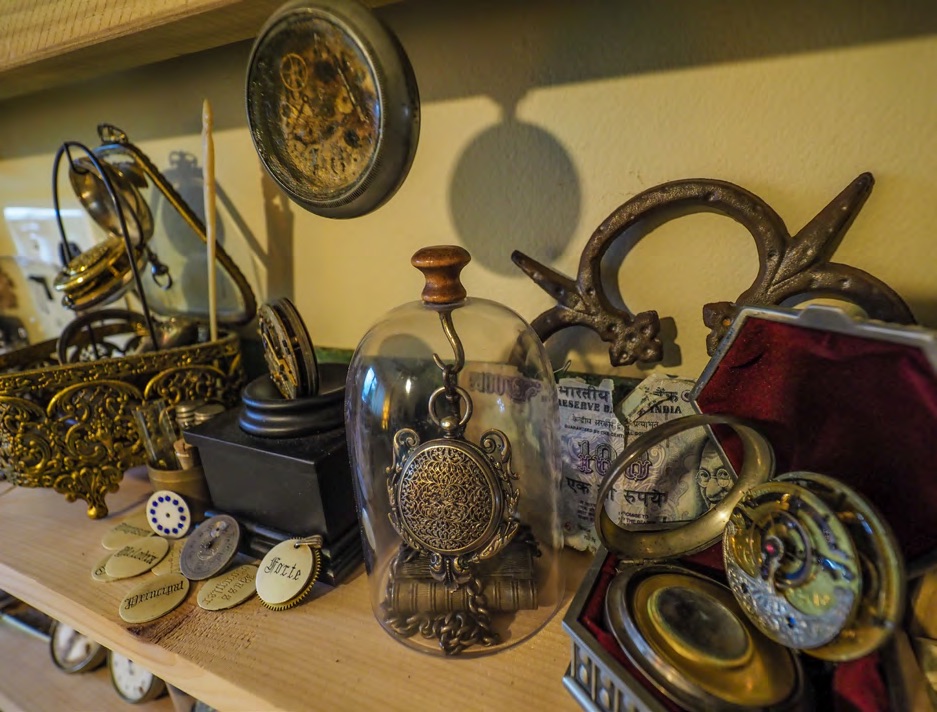 Other sculptures incorporate movement, like a jaw-dropping tribute to Edgar Allan Poe, which features a swinging pendulum, a reference to Poe’s celebrated short story The Pit and the Pendulum. The tiny face in the watch case really does look like the long-departed, famously depressed literary genius. Perhaps even more fun, or at least more stylish, is the sculpture Beatrice created for footwear designer Steve Madden. It has shoes that kick and move when the watch case is popped open.

Beatrice, who grew up southern New Jersey, was destined to make art. Drawing, painting, and sketching (along with her grandfather’s watches) consumed her from a young age. When the time came for college, the Pennsylvania Academy of Fine Arts in Philadelphia was a logical choice. Beatrice was already more successful than most of her peers, selling her wildlife paintings and exhibiting them in places like the congressional office buildings in Washington, D.C., which hosted her work when she was just fifteen. But it wasn’t until she took a sculpture class at the academy that she discovered her true love. Already aching to create form and frustrated with the limited dimensionality of painting, Beatrice found freedom in sculpture. 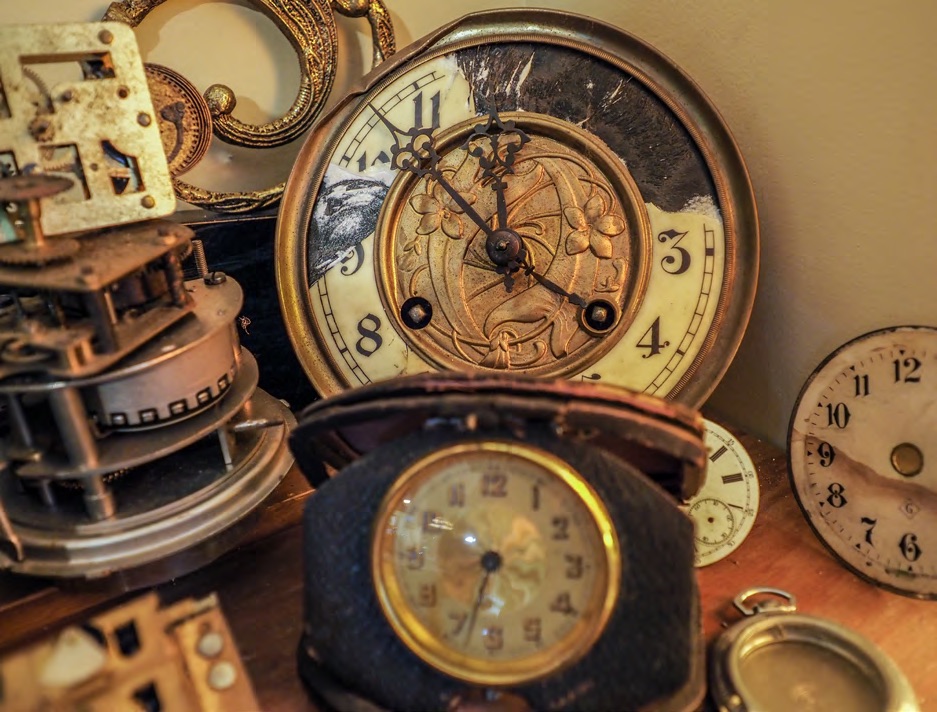 Her star continued to ascend, but in a new galaxy. Before Beatrice could finish her classes she’d been recruited by the Franklin Mint. She sculpted coins and other relief pieces for the collectibles company for four years, moving on next to the toy industry, where her first project was designing figurines for the wildly popular Cabbage Patch Kids line. Over the following few decades, Beatrice would create crystal for Waterford Crystal, chocolate for Frankford Candy, and character sculptures for studios including Disney and Warner Bros.

“I often had the opportunity to create sculptures of products from upcoming movies before the public was aware that they were in the works,” Beatrice says. “I would get to view style guides and storyboards that were still being created. From this information I sculpted characters from The Lion King, The Hunchback of Notre Dame, Mulan, Little Mermaid, Cars, and characters from classic films such as Pinocchio and Snow White. Over the years I think I worked on pretty much every Disney character you could think of, from Pooh to Maleficent, and of course, Mickey and the gang. For Warner Bros. I worked on Bugs Bunny, Taz, Animaniacs, Harry Potter, and many more—too many to recall, really.”

Beatrice was making a comfortable living as a commercial artist specializing in licensed products, but she wasn’t happy. The hours were grueling, the work was
repetitive, and most of it was headed to China by then anyway. Just as
crucially, Beatrice wanted creative control over the forms her hands shaped. She wanted to make what she wanted to make. So she took a deep breath and did the most terrifying, most fulfilling thing an artist can do. She quit her paying work to focus on what made her soul sing: her own art. 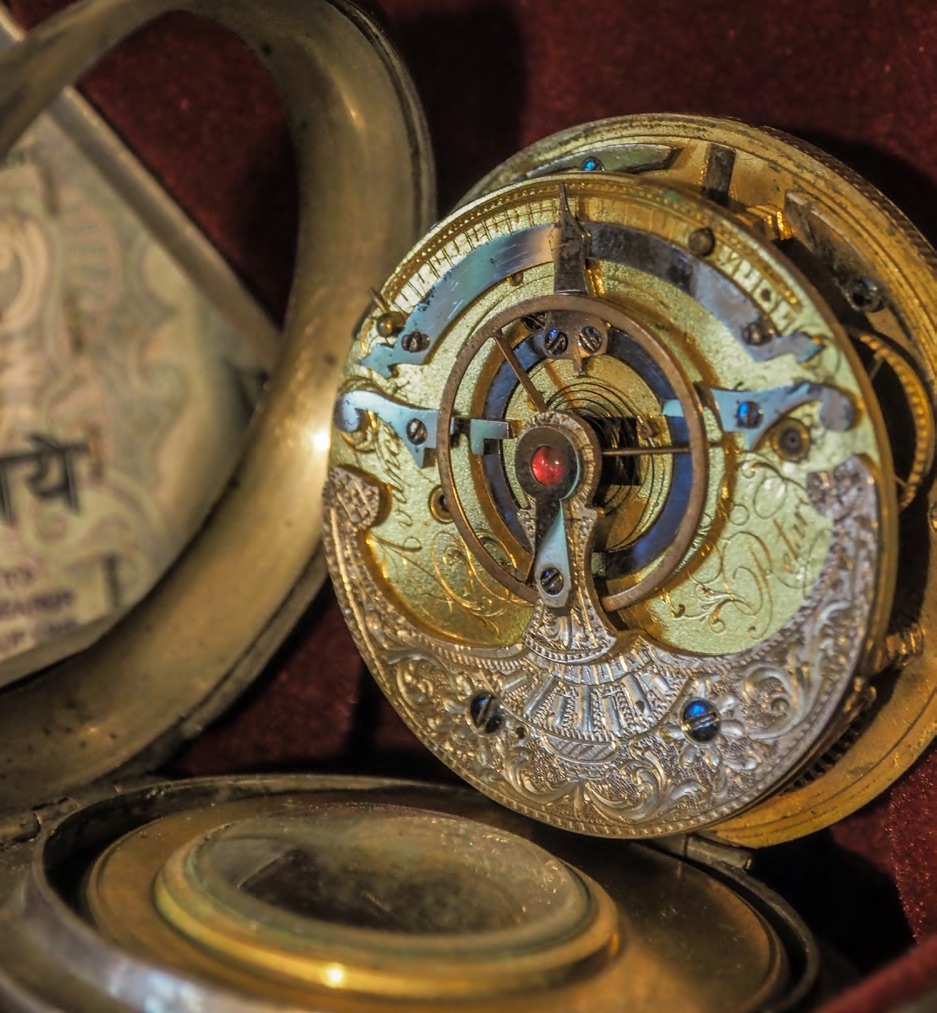 Shortly after, in 2011, Beatrice moved to New York and founded her own company, All Natural Arts. By all appearances it is just as successful as everything else the artist has done. Her pocket-watch sculptures now fetch from $1,500 to $7,500, depending on the additional elements Beatrice and her client want to add to a piece, including stands, fobs, chains, engravings, and more. The average cost for one is about $2,000.

Drawn to nature since childhood, the artist began creating things out of organic material like sticks, clay, and insect wings, perhaps even snakeskin. Some of the pieces were miniature and all the more delicate for it. “I started encasing them in antique watch cases,” Beatrice says, “because I thought it was a beautiful way to display them. And when I bought the cases, they often came with gears or things that were loose that I started to incorporate into some movements. The more I incorporated gears and such, the more popular the designs became. I began to transition and use less and less of the natural elements, although I still sometimes throw in natural elements because it’s a nice dichotomy between the harsh metal pieces and the soft natural forms.” 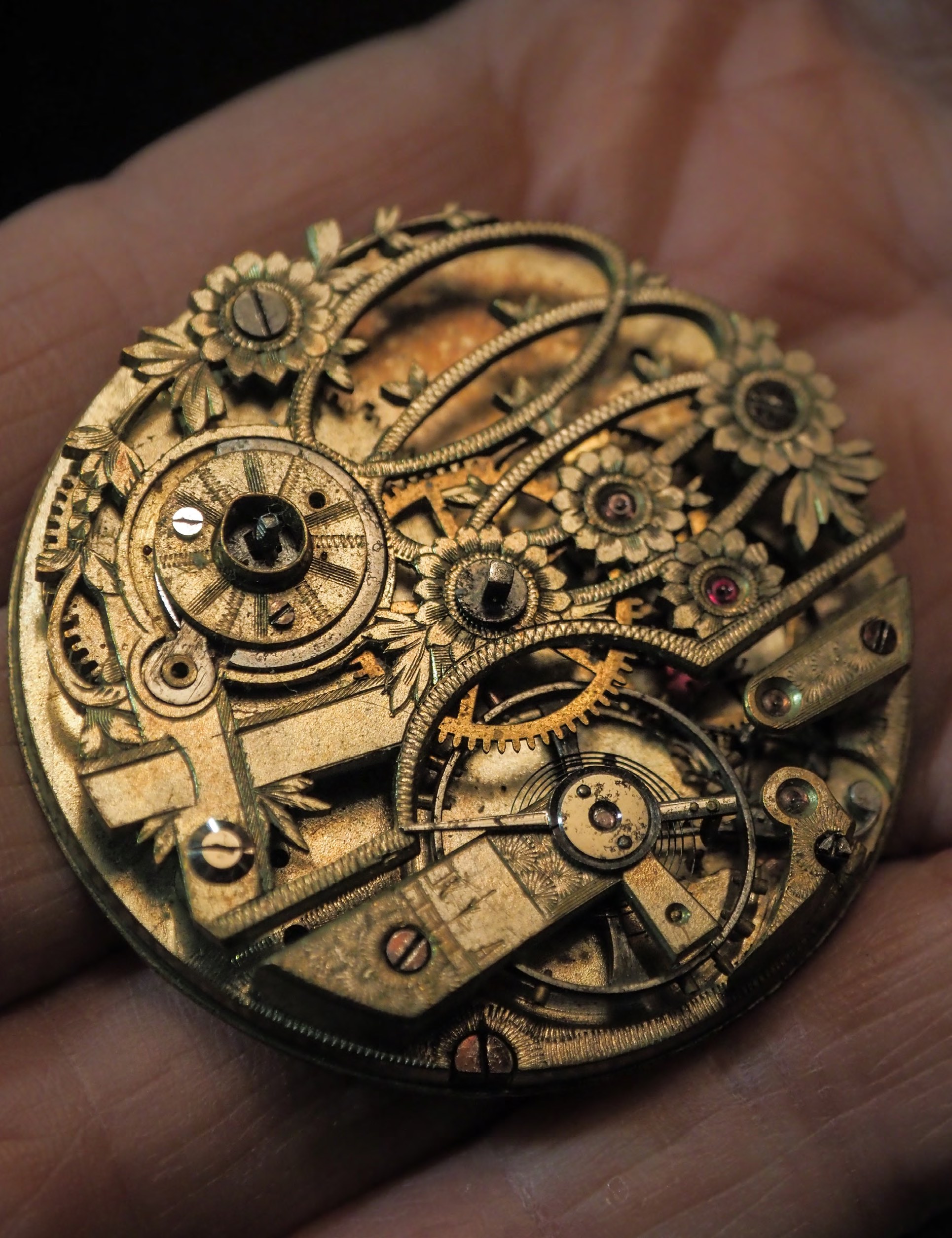 Beatrice begins each commission by digging up photographic reference material for accuracy and making a sketch to help with composition. The actual work itself is, not surprisingly, slow and deliberate, what Beatrice calls “a painstaking process involving a lot of temporary placement of pieces while I decide if I can find something that fits the spot better.

Whenever possible, I attach pieces mechanically, using screws or wire through pre-existing holes. When this isn’t possible, I use a combination of methods, from metal epoxy to resins and occasionally soldering. Many small parts are too delicate to solder.”

Still, Beatrice says creating her pocket-watch sculptures doesn’t involve much patience because she loves what’s she doing. So do her clients. “Generally when people buy these pieces, they’ll buy them as gifts,” she says. “Sometimes they’ll buy them for themselves, but either way they’re meant to be kept and eventually passed on to family members. This isn’t something that people do lightly. They pour a lot of emotions into coming up with ideas for their sculpture. And frequently when they receive them, they’ll be overcome with emotion, because they’re very meaningful to them.”

For more information about Sue Beatrice and her work, visit allnaturalarts.com.