Home Faerie News Mayte: To Dance Among The Stars 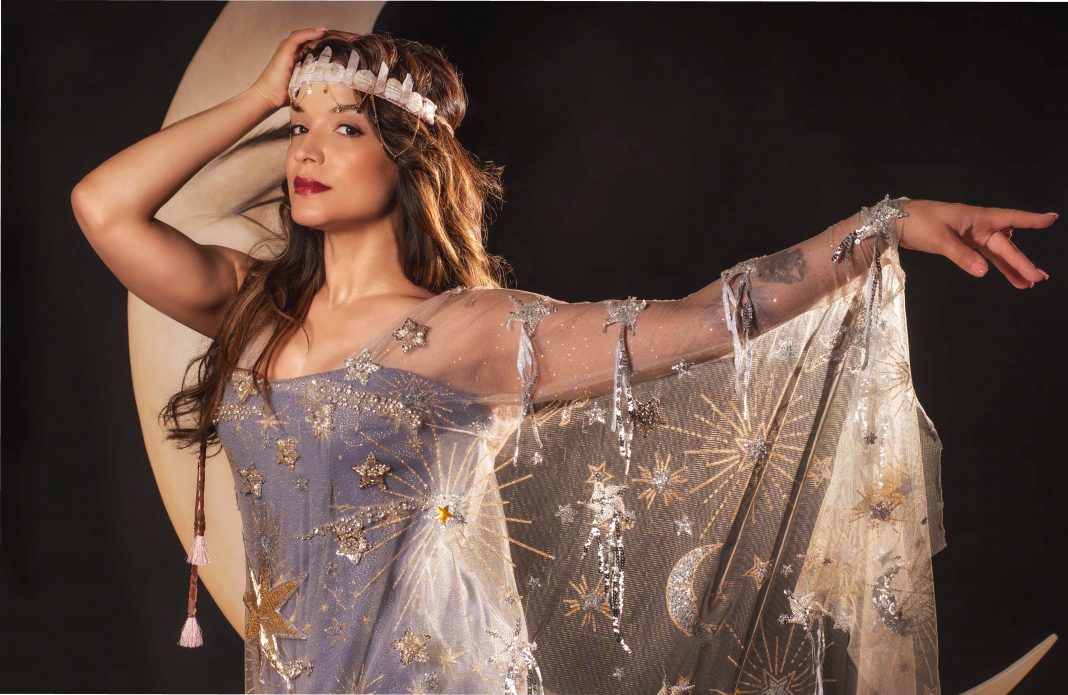 When Mayte Garcia—more widely known as just Mayte, her given name, which is the Basque word for “beloved”—walked into Steve Parke’s Baltimore studio last June, she was radiant, luminous, and pushing a scruffy little scrap of a dog named King Ziggy Smalls in his very own stroller. Ziggy, I later learned, was found abandoned in a crate on a California highway and then had the good fortune of being brought to Mayte’s nonprofit dog rescue, where she not only nursed him back to health but fell madly in love with him. Now Ziggy is the mascot of Mayte’s Rescue, and recent Instagram posts show him traveling the world with his glamorous human counterpart, even sitting on a camel on a trip to Morocco. Hashtag
#frombeingthrownoutliketrashtobeingkingofthemoroccandesert

It’s a mini fairy tale amid a life that’s already been pretty enchanted. In her best-selling 2017 memoir The Most Beautiful, My Life With Prince, Mayte describes her exotic early years, when, after watching her mother take belly-dancing classes at the local YMCA, she became enamored of the dance. Her mother made her a costume to match her own—a “floaty dream of colorful chiffon, spangled with a galaxy of sequins and dripping with paillettes”—and at age five Mayte began performing alongside her at restaurants and parties around their North Carolina town. As a little Puerto Rican girl in a place where everyone else was black or white, she felt out of place; when she was dancing, all her worries disappeared and a powerful euphoria took over. In a phone interview, she says, “When I was belly dancing, I got to play dress-up, and I got to perform and express myself. I remember thinking, Onstage, I’m untouchable.” In her book she says, “Dance was my secret power, my doorway to another dimension where there was only beauty, only music, only love.” 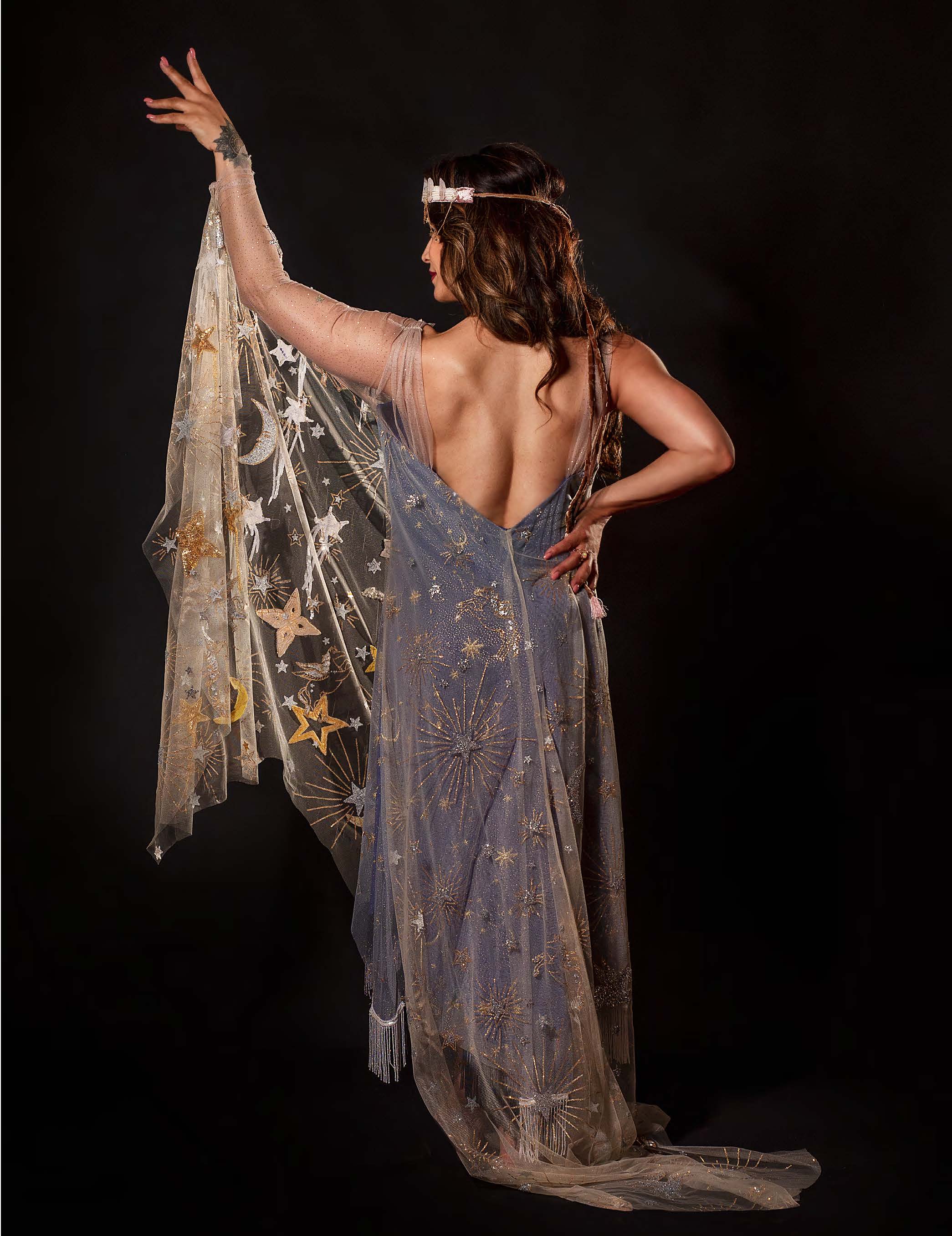 By age eight, she was performing regularly and twirling with a sword balanced on her head, a feat that landed her on the 1980s show That’s Incredible! You can see the video on YouTube today: a stunningly bedazzled girl with long dark hair shimmies to Middle Eastern music while playing the zills, balancing a sword on her head, and, with said sword still in place, doing a Turkish drop to the floor and flipping quarters on her stomach, one by one. “Princess Mayte,” she’s called. The subsequent years saw Mayte attend ballet school (she was a ballerina even before belly dancing), move to Germany with her family, and belly-dance regularly—at parties, weddings, corporate events—so that she had over $100,000 in savings by the time she was fifteen. She and her mother made regular trips to Cairo to visit Madame Alba, “the Coco Chanel of the belly-dancing world,” and her dream was to dance in Cairo, in a grand hotel with a fifty- piece orchestra.

What she says now of being a professional dancer so young and missing out on regular childhood activities is lovely: “If I can give my daughter one thing, I want to give her what I got from belly dancing: a sense of myself as precious.” Belly dance was and is not a dance of seduction for her but of empowerment. “I wasn’t onstage to turn anyone on,” she writes. “I was there to practice this ancient art form and make it my own.” Today, as a teacher of belly dance (the night before the Baltimore shoot, she taught a workshop in D.C.), she tries to bring that sensibility to every woman she meets, a sense that what you are right now is magical. “It’s a liberating dance,” she says. “Ageless, bodiless in a way—it doesn’t matter what size you are. It doesn’t matter what race you are. Unlike in ballet or jazz or flamenco, there are no rules. It’s about movement, and what your body is feeling in that moment.” She tells her students not to get frustrated; they’re perfect as they are.

It was this radiant self-confidence, rooted in dance, that made Prince notice her, she believes now. The idea of Princess Mayte meeting her Prince seems over the top, made up, but that’s what happened, changing the trajectory of her life and landing her in Minnesota rather than Egypt. When Mayte was sixteen, she and her family went to see the superstar musician perform in Barcelona. Her mother had urged her to make a video of her belly-dance performances, sure that they would impress Prince and advance her daughter’s career, and they managed to get a copy to him at the show. The meeting between Mayte and Prince that followed was the beginning of an unusual, artful, and initially chaste friendship, marked by endless packages in the mail and phone calls and art inspired by her dance and his music, that eventually blossomed into romance—and marriage—some years later. 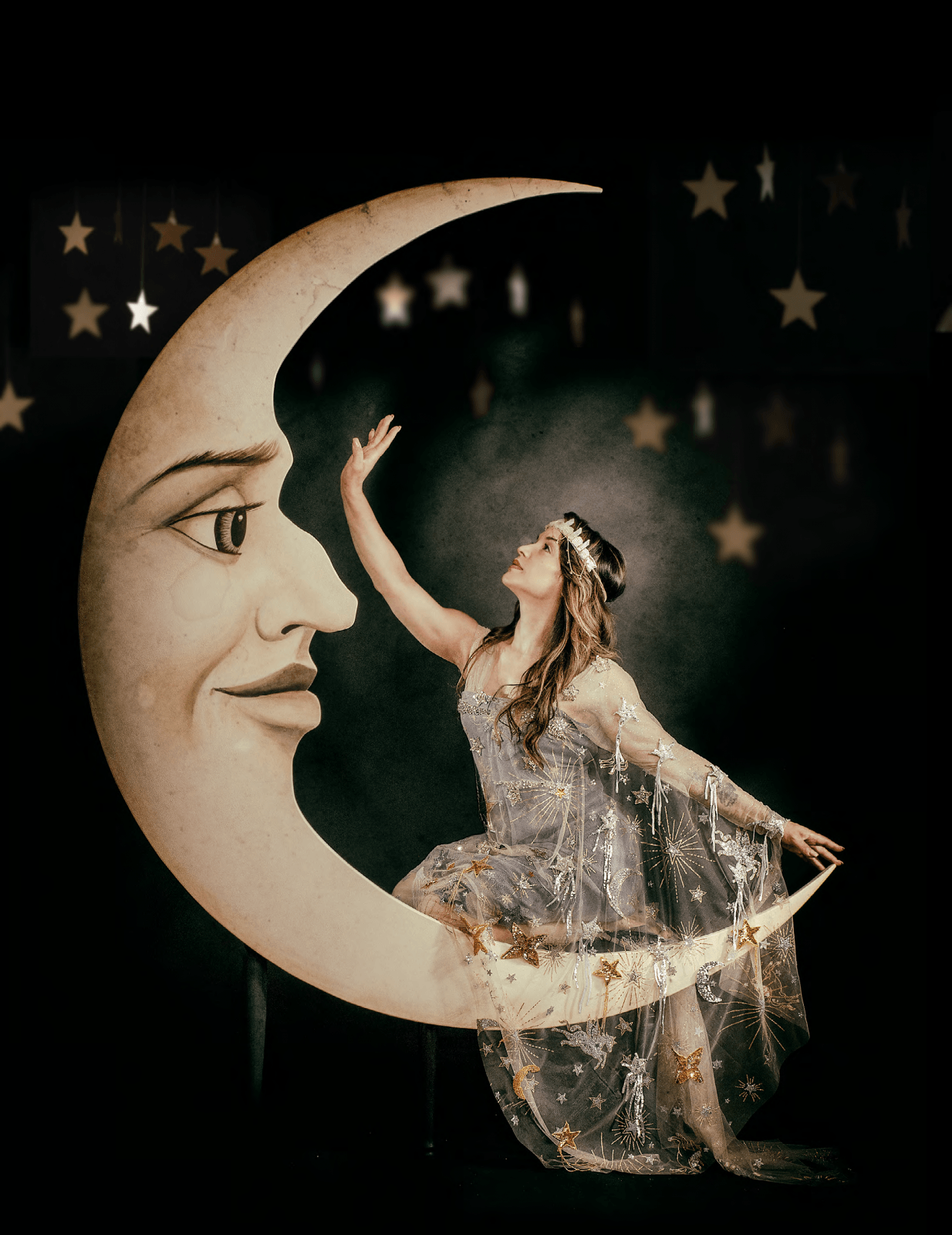 It’s dizzying to hear of it: how he’d watch her videos and incorporate the Arab influences into his own work, how she’d share dance after dance with him and eventually move to Minnesota as a paid member of the New Power Generation. How they fell in love and spoke all through the night, entering meditative states together and speaking soul to soul. And they created art together, all the time. They traveled the world together, performing side by side. One of her favorite moments? Writing and directing the fairy-tale video for a song he’d written for her, “The One.” When Mayte became pregnant, they were overjoyed.

But every lover of fairy tales knows that there’s usually pain and suffering involved in the princess’s journey, and there’s a point when Mayte’s tale shifts. It’s harrowing to read about, the abundant, overwhelming joy and excitement she and Prince felt during her pregnancy with their son Amir, and the early signs that something was off. The day of his birth, the joy that turned to terror when they saw the life-threatening deformities amid his beauty, and the extreme love and hope as their child suffered. Amir would die within a week of his birth. It seems clear that the couple did not recover from the trauma of this loss—at least not together. The heartbreak was mitigated when, two years later, Mayte became pregnant again, but the miscarriage that followed was crushing, and the marriage did not last.

What struck me most when reading Mayte’s book, when meeting her in person, and when interviewing her for this piece was her relentless positivity and ebullience, the generosity and love with which she speaks of Prince, for example, after all that happened, events that could have made others turn against the world. She tells me she did not dance for over a decade after her marriage ended. I asked her, How were you able to survive and stay so … enchanted? How do any of us, when we suffer pain and loss? In her book she describes a moment when she was so lost in despair she considered suicide, and how her little Yorkie Mia came to her, desperate, pawing and scratching Mayte’s leg, demanding to be picked up. And then the dog “pawed and licked and rubbed her face against mine until I put the pills back in the bottle and sank on the floor and held her …” (On the right is a 1998 photo by Steve Parke of Prince, Mayte, and Mia in their Spanish home.) This led Mayte to start rescuing animals, the way Mia rescued her. 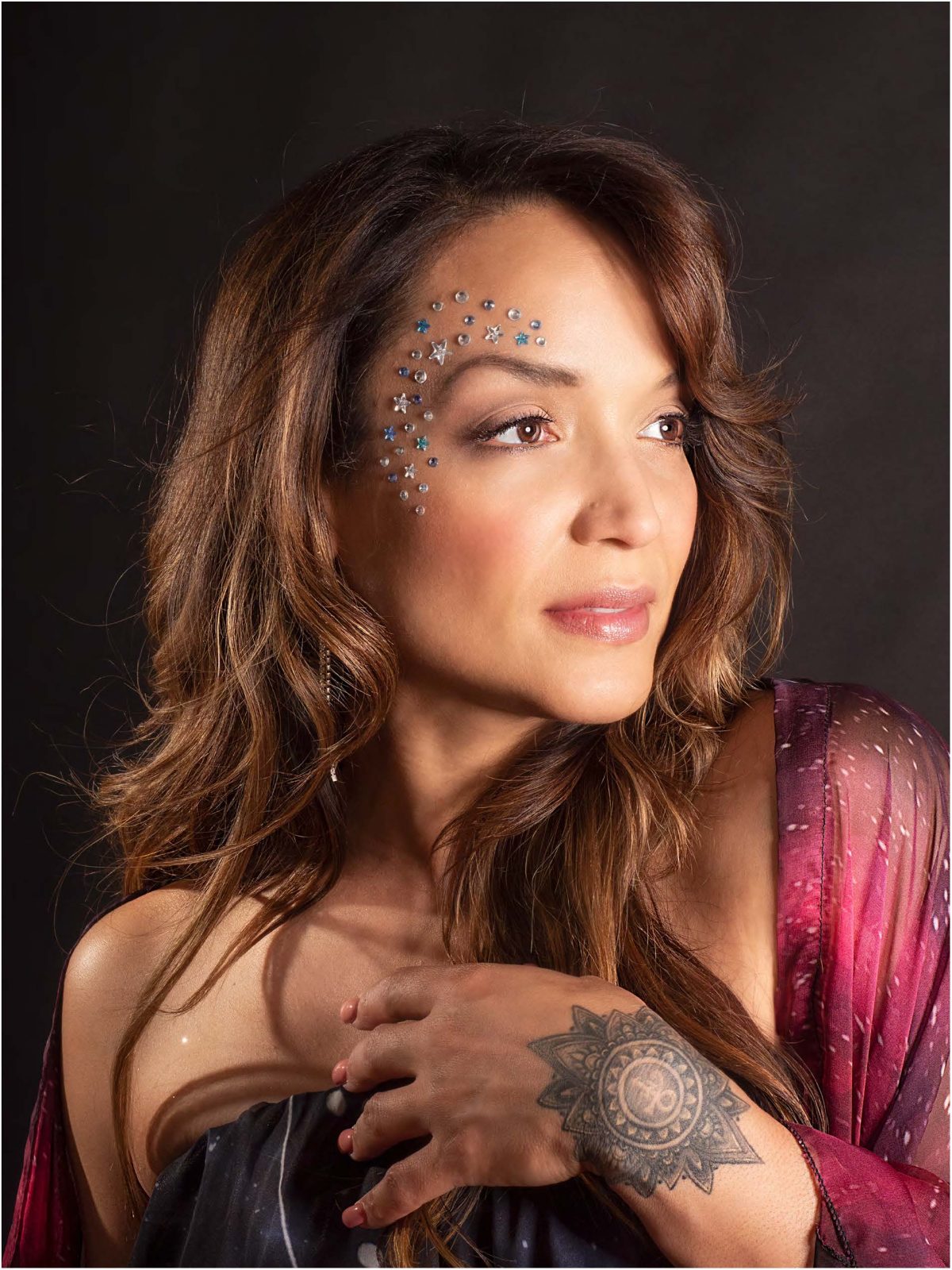 Something else happened too, sometime later, after she moved to Los Angeles to start anew: “Nobody had ever told me that I was a mom,” she says. “When you have a miscarriage and you lose a child, all that goes out the window, and nobody wants to talk about it. Nobody wants to bring it up to you. I went to a therapist, and she said, ‘You’re a mom who lost her child.’ It was like this huge veil was lifted off of me. And I got to kind of find myself, because I know my body gave birth. I know, but it’s not being able to live that. So that was a big awakening. And then in my soul, something told me, ‘You need to start dancing again.’ And I listened.”

She also listened to her soul when a little girl came into her life, a magical nine-month-old creature with her same birthday and a birth mother who wanted to place her for adoption and had seen Mayte—a Latina like her, a loving mother without a child—on television. Mayte adopted Gia—“the most beautiful girl in the world,” she says, a gift—and now they live in a sweet house with King Ziggy Smalls, plus another nine dogs, one cat, seven birds, and a guinea pig. Gia just turned seven and loves to draw; she recently drew Ziggy for shirts sold on the Mayte’s Rescue website. 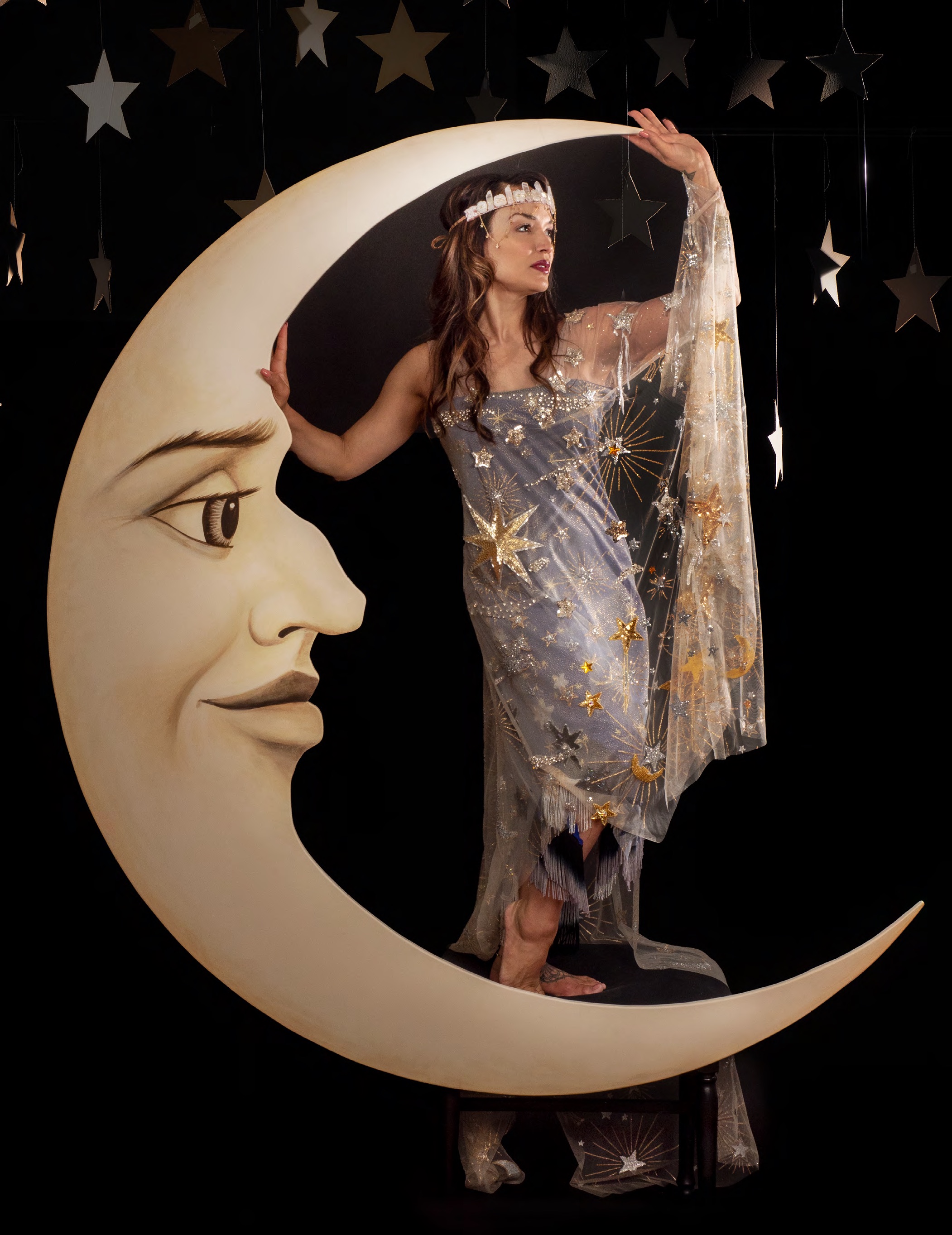 Mayte’s crafted a new life for herself now, full of art and love and family, and through the rescue she creates new little fairy tales—forty a month, on average—for lost, discarded creatures whom she helps find their way to their forever homes. What is enchanting to you now? I ask, and she lists an array of things. She loves to play dress up still, now with her daughter, and craft, and teach women the art that has shaped her life. She still listens to Prince’s music and still speaks to him, she believes, soul to soul. She rescues. “These dogs that are suffering,” she says, “seeing them wagging their tails, being happy, and then placing them—that, to me, is enchanting.” And, of course, she dances. 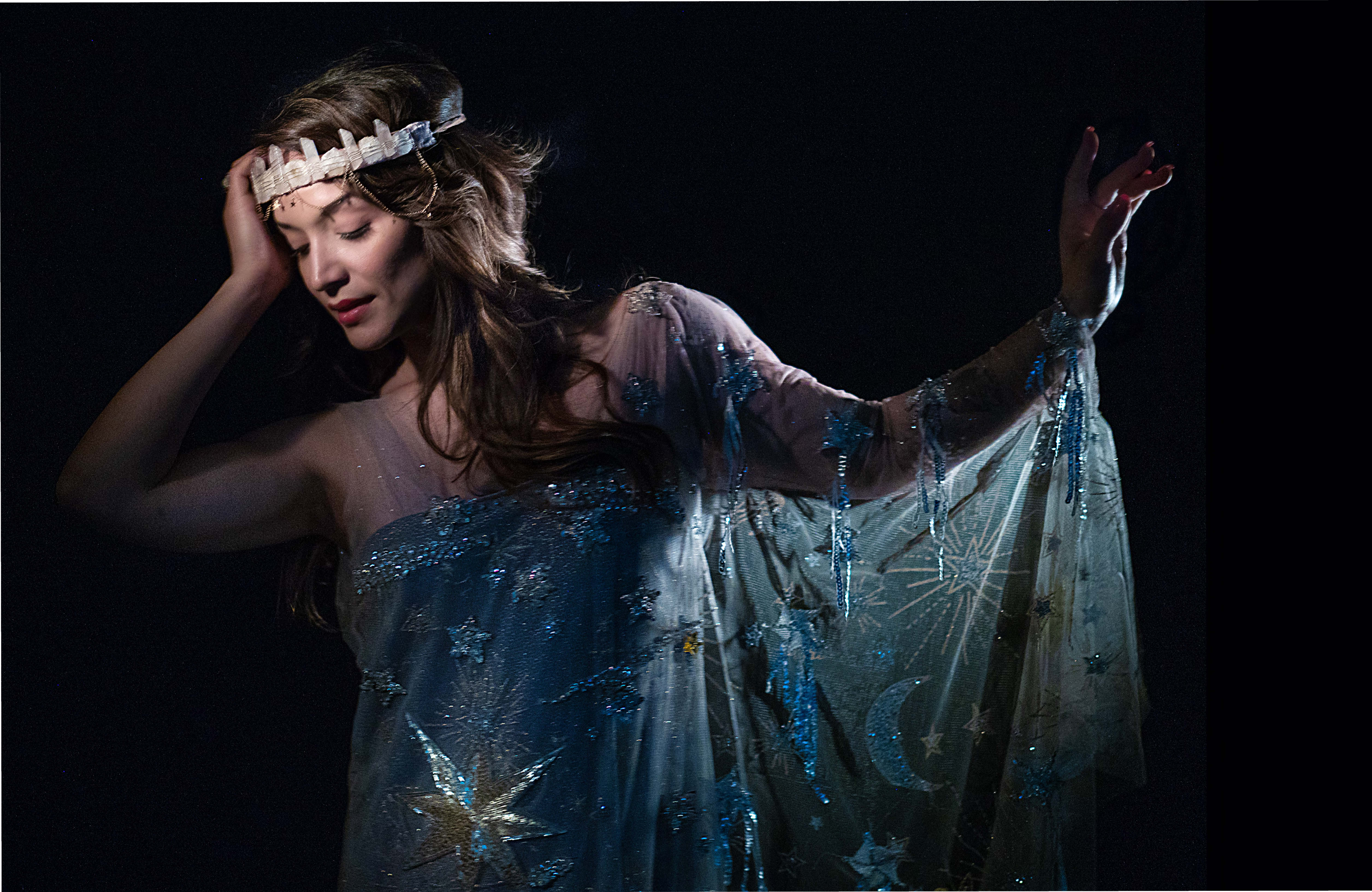 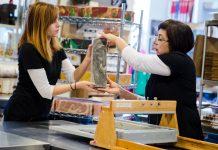 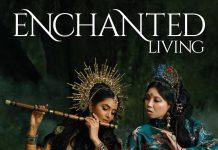 An Introduction to Enchanted Asian Day