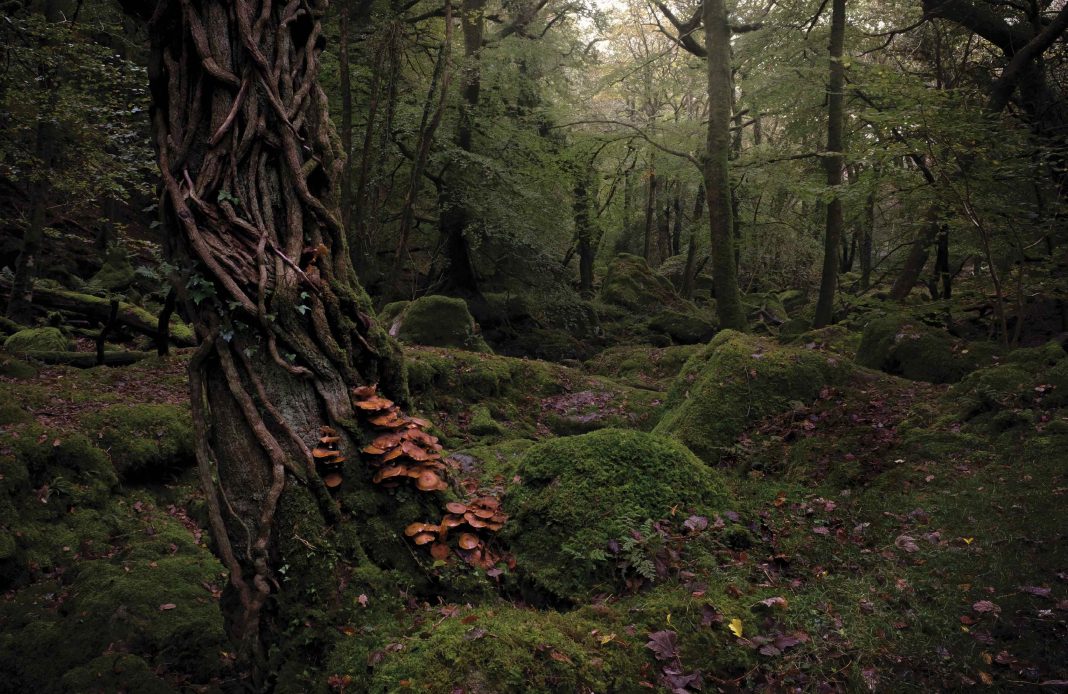 The places Rebecca Moss photographs seem to have sprung from some old, old faerie story, haunted by a Titania or Mab or Morgan. Even though I’ve never been to a forest like the ones in her photos, I feel sure that I can remember having visited a place like that once. Every photo is like a little gateway to another world—a buried, ancient memory. When I first scuba-dove I could not believe the things I saw; I couldn’t believe that such an astonishing, magical world exists just below the surface of the water, that I might have gone my whole life without witnessing it. These photos make me feel the same way. These are the wild woods where the queens we’re celebrating in this issue would live. I hope one day to visit these actual places, but for now I have—and you have—Moss’s exquisite captures that fill her Instagram feed @one_becky_blue and, soon enough, her online shop.

We’ve shared Moss’s photos for years now on our own Instagram, but, unusually, didn’t know anything at all about her, this woman who stalks these ancient spaces in photos so vivid you can practically smell the moss and soil. So one day this winter we scheduled a call on Skype, which she’d never used before, and then she appeared as I might have imagined: in her stone cottage, a fire behind her in a little stove, with a fae, delicate beauty and pale, glimmering hair. She lives, she explains, in Dartmoor, in the moorlands, surrounded by the footprints of thousands-year-old huts and twisted, moss-ridden forests that she can walk to from her front door. She did not come from this place, though. She spent most of her childhood in Holland and grew up near the sea, and also spent years in the West Country and London. Dartmoor has only been her chosen home for the past five years.

She’s been taking photographs since she was a kid, but only started taking “green” photos around the time she moved to Dartmoor. Once upon a time she was a street photographer in London, taking moody black-and-whites of people and developing them by hand in the darkroom. To her, it’s not so different to photograph Dartmoor’s forests, where every tree has its own character and personality she tries to capture.

Her lifestyle inspires jealousy. A few times a week, she leaves her cottage and enters the forest, immediately taking herself off the pathway. This is the secret to forests, she says: to leave the paths and get properly lost but to always have a properly charged phone with GPS so you can find your way back. (An extra battery doesn’t hurt either.) This way you can tune into the woods and become part of them. “That’s the magic for me,” she says. “Being on my own and seeing what happens.” Because the light has to be just right for her to photograph, she spends most of her time exploring, maybe sitting for an hour or two and zoning out. She’ll focus on all the life swarming around her, every small detail—light in a web or buzzing insects, birds, the lines and curves of trees, branches and the shape of stones. Her goal: “To get into that headspace of being a thing in woods rather than a person in world.” The energy of the woods is very powerful, she says, a beautiful fae energy she can tap into and get lost in. It is when she lets go of human thinking that she can “cross over”—then “all of a sudden I’m aware that I’m sitting in the heart of something very alive and much bigger than me. I realize that I’m actually as small, in the scheme of things, as even the beetles and the birds.”

And then the light shifts, and she picks up her camera to capture it.

Later she writes to me: “I have thought about why I go to the woods and what is going on for me when I do. I go to daydream, to allow a different world into my headspace. To let my mind kind of loosen its grip on human life and just acknowledge that I am part of nature too.”

While some of us can visits parks and forests, not all parks allow wandering in this way, and not all of us have the enchanted wood outside our door. Moss’s images are a kind of portal, though she wishes she could capture “the smells of earth, the feel of wind on skin.” I tell her I feel those things when I look at her images. I feel them, remember them.

For those of us who can only dream and remember the feeling of losing ourselves in the forest, Moss advises, “let yourself daydream, let your imagination flow free. It is the only thing that completely belongs to any of us, and it is a kind of freedom, and the forest is a beautiful headspace to be in. Even if the starting place for your daydream is just a photograph, it is still a real and beautiful place somewhere.”

Daydreaming is not a replacement for experience, but an experience in itself. “I think daydreaming is the beginning of many of life’s adventures,” she says. “There is so much bombardment of stuff in the world. Remembering that there is a beautiful natural world and daydreaming into that space has got to be good for your head. Actually, for sure it is.”