You would be forgiven for not knowing her name. She isn’t Morgan le Fay or fair Titania. In fact, we could find only one artwork depicting the faerie queen Étaín to illustrate this article. But she is a faerie queen all the same and the one whose story is dearest to my heart.

Who can say why one character from myth speaks to our hearts more than any other? Some would follow the Morrigan into battle without a thought; others feel their hearts stir at the thought of Diana. I first heard the story of Étaín from a self-proclaimed bard when I was in my early 20s, almost two decades ago. Whatever magic awakens when a person first hears of the mythic archetype who will be their guide for life, I felt it then.

Étaín first appears in Tochmarc Étaíne, or “The Wooing of Étaín,” a story in the Irish mythological cycle. As for the pronunciation of her name, I have heard numerous suggestions ranging from “Eh-tayne” (how I usually say it) to “Aydeen” to “Eh-thayne.”

Once there was a faerie king by the name of Midir, who fell in love with Étaín. He made her his wife and they were very happy together, but his first wife, Fuamnach, was furious about their union. She turned Étaín into a pool of water, from which emerged Étaín transformed into a fly. The fly remained with Midir until Fuamnach conjured a storm, which blew Étaín away and buffeted her on its winds, nearly breaking her. After years of fighting the winds, she landed near the faerie Aengus, who made her a little bower in which to rest. This respite, however, was short, since Fuamnach again found her and conjured another wind, torturing her with exhaustion until she landed in the wine glass of a mortal queen. The queen drank from the glass and became pregnant with Étaín, who was reborn in mortal form with no memory of who she’d been before.

Midir, burning with love for his beloved, searched through land and sky for where she might have gone and finally found her in her mortal body. But this was not before many years had passed, and she had been married to a king, Eochu Airem. Midir then came to Tara to challenge Eochu to a game of fidchell, a Celtic game similar to chess. The two kings, mortal and disguised faerie, played their first game, and Midir gambled a fine group of horses. That night, Midir came to Étaín in her dreams, whispering to her of his love and of her true and forgotten form as a queen of faerie. The next day, the kings played another game, and on it went, with Eochu proposing outlandish stakes and Midir intentionally losing and performing magical feats like building walls and forts for the mortal king overnight each time. And each night, Midir would come to Étaín in her dreams, as she slowly began to remember the truth of who she was.

Finally, Midir went to Eochu for one final game, and the stakes were seemingly simple on his part. If Midir won, he could claim one embrace from the queen, Étaín. Of course, the king agreed, having won many previous rounds, but this time Midir showed his prowess and claimed his prize. The furious Eochu insisted that the embrace occur in his throne room, and when the day to claim the prize arrived, Midir found the castle surrounded and guarded by Eochu’s soldiers to prevent Midir from escaping with Étaín after he claimed his rightful prize.

Midir walked up to Étaín, and she recognized him and knew her own truth. When he embraced her, she kissed him, and the two transformed into a pair of swans, flying up to a tall window in the chamber and away, back to their kingdom.

The myth continues from here, and alas, there is not a happy ending. But the tale I have recounted here compelled me from the moment that I heard it—the wooing of Étaín, the love story. Of course there are some problems with this myth when one looks at it with a modern eye. Fuamnach is cast as the villain in the piece when she is rather like a Hera character to Midir’s Zeus, the first wife who actually has every right to her anger. But just as Callisto, Demeter, and other goddesses—all unwitting “other women” who caught Zeus’s eye—are still beloved by many, so Étaín is beloved to me. But not for her love story. Étaín herself pulls at my heart for another reason, which can be explained with a Welsh word that has no English equivalent: hiraeth.

Hiraeth means a longing for a home that no longer exists or never was. It is the term for an inexplicable bittersweet melancholy when we smell something and it conjures a memory not our own or not quite graspable, or see the shadows fall across the trees in the woods in a way that breaks our heart and we just don’t know why. What must it have been like, I’ve asked myself for almost two decades now, to be Étaín, only knowing her one mortal life until Midir came into her dreams and reminded her of who she had been before? What turmoil of longing and confusion must she have felt? This detail of Midir appearing in her dreams is not found in the original manuscript but has been added over the years and become a part of her mythos. To me, it is the most important part.

When I think of faeries, I feel this same sort of longing. Sometimes, those of us who love faeries are asked a question in interviews or candid conversation: “But do you really believe in them?” For me, the answer is absolutely yes. I believe in them both on the literal physical level and as a magical concept. But the main reason I believe in faeries is hiraeth. When I read their stories or feel their magic in the woods, I feel this hiraeth, and I relish it. The important thing is not whether faeries are objectively real. This is why when the first question is often followed by a second, “Have you ever seen one?” I answer truthfully that I don’t think I would want to. Faeries are not about proof but possibility. They stand in the liminal place where questions aren’t answered. But there is always this hiraeth for those of us who feel it when we hear their stories or sense them near—this vague and bittersweet pang of remembering, though the details may slip through our grasp like fog.

Étaín is the archetype of hiraeth for me. I can feel her yearning for a life she’s never known, imagine how she might have cried sometimes when light fell in a certain way or laughed without understanding why. I had my own experience of this feeling when I went to a concert a year or so after I first heard Étaín’s story. The musician was Tori Amos, a fire-haired pixie siren whose music had helped guide me through my teen years. I sat in my seat as she wove her spell throughout the concert, and I cheered and laughed with everyone else. But then she came back for a final encore, and she played a song I’d never heard before. The name of the song was “Etienne,” a name with a different origin from my faerie queen but a very similar sound.

Amos sat down at the piano, feet bare, and began to sing. “Etienne, Etienne, hear the west wind whisper my name. Etienne, Etienne. By the morning maybe we’ll remember who I am.” It felt like I didn’t breathe for the entire song. The tears fell silently down my face as the last notes echoed from the keys and the audience cheered and began to leave. My concert date turned to me and was shocked to see my expression. I didn’t stand up until the concert hall was almost empty.

“Maybe we’ll remember who I am.” Perhaps. And perhaps not. But I wouldn’t trade this hiraeth, this yearning, for all the objective knowledge in the world. Étaín is my faerie queen, and she reminds me of what it’s like to remember without remembering, to yearn for a place I’ve never seen. 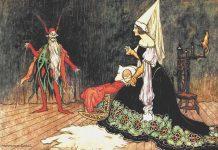 It’s Just A Story: Finding The Real In Faerie 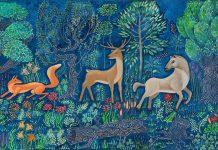