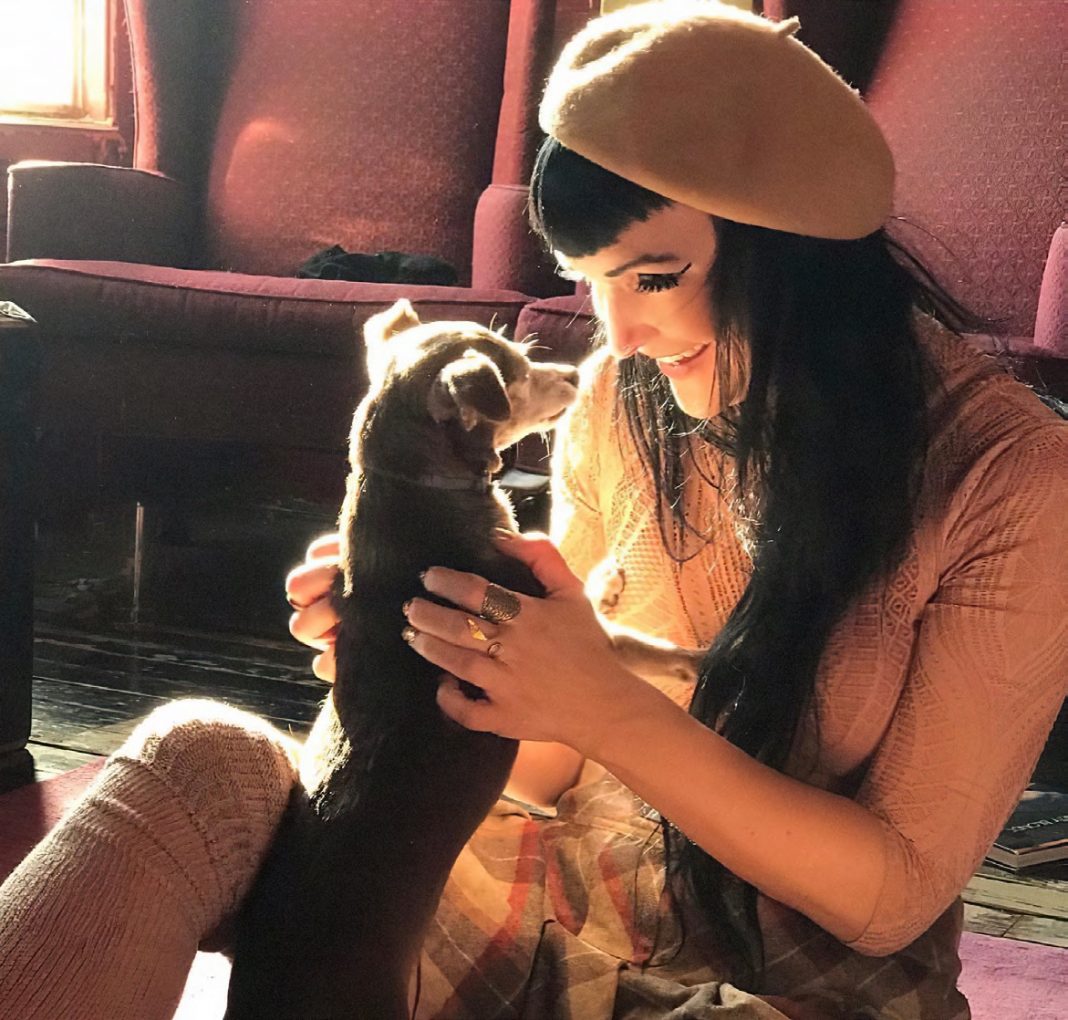 She is known as Queen Wolf of the Witches.

She is a four legged wonder of an animal, a great wolf spirit present in the body of a nine-pound chihuahua.

She has a thousand and one names, as magical creatures often do.

To me, she is Niney, a word combination of nine and tiny. We have enjoyed grand adventures together for fifteen magical years and counting. She has been by my side longer than any other living creature.

Her keen sense and almost supernatural instinct guide us on magical adventures in the forest. Running free, her four legs lightning quick, she knows the paths to the deer, to the dragonfly river, to the tiny squeaking chipmunks hiding in the moss. In the sun-soaked field, she blinks her eyes beside me, head lifted, sniffing the breeze, as I carve candles, throw down tarot cards, and string roses together in a love spell.

When I started Witch Camp gatherings, magical women from all over the world came together and sat in a circle playing drums, shaking rattles and tambourines, singing in dying languages that Fre Atlast taught. Then, the Wolf Song happened, and on cue, Niney sauntered into the middle of the circle, threw back her little head, and howled. To this day, it has become a tradition that she howls at both the beginning and end of all our gatherings. We all throw back our heads and howl with her, and then she puffs up her tiny chest, proud to be the Queen Wolf of us all.

I am honored that she chose me and that she is my familiar.

WHAT IS A FAMILIAR?

A familiar is a loyal animal companion of a witch. The two are deeply tied in spirit, emotion, and magic workings. A familiar and a witch walk together, connected by a stronger bond than human language can define. It is my personal belief that there is no master in a familiar-witch relationship; both offer strong support to each other. When a familiar crosses to the other side, the familiar will still connect with the witch through dreamtime messages and signs. The bond is eternal.

The concept of familiars and our connection with the animal kingdom have existed throughout history, etched in the fabric of fairy stories and folklore. Ancient shamans relied upon animal protectors to watch over them when they fell into a trance state, and neolithic cave paintings showed great reverence for animals, who were depicted in magical scenes and decorated just like the humans standing at their sides. WHAT IS

THE MAGIC OF FAMILIARS?

Animals are a connection to the deep wild. In worldwide cultures throughout time, animals were worshipped for their otherworldly heightened senses and focused natural instinct. Having a deep connection with your familiar will bond your magic between animal and human worlds. When we allow our familiar to be a teacher, we gain a greater understanding of instinct and our own wild magic.

HOW DO YOU CALL A FAMILIAR TO YOU?

If you don’t yet have a familiar in your life, you might take into consideration what animals you have experienced a natural connection with.

My first human words were not mom or dad but “Sneaky,” the name of my first canine companion. I learned to walk by holding onto her collar. We walked side by side, and then one day, I let go and took my first steps on my own. The canine friends are always the ones that showed up for me.

That being said, you don’t have to limit yourself to the idea of having a familiar that lives with you. Familiars can also be animals of the wild, like squirrels, ravens, bunnies, owls, deer—any animal that makes a regular appearance to you.

A SPELL FOR DRAWING YOUR FAMILIAR TO YOU

♥ Write a petition (a letter to the spirits, ancestors, angels, or guides who watch over you). Ask for the guidance and teachings of a familiar to come into your life and allow the gates to the magical realm of the wild to be opened to you.

♥ Take a strand of your hair and tape it onto the letter.

♥ Scroll the letter towards you. This is an old Romani-Czech tradition in my family for bringing what you are asking to you!

♥ Hide the scroll inside a tree, tie it to a birdfeeder, or bury it in a garden to “grow.” Use your imagination of where to put your request.

♥ Do this spell during the new moon, and by the arrival of the full moon, you will have an indication of who or where your familiar is!

A BONDING SPELL FOR YOUR FAMILIAR AND YOU

♥ Take a piece of your hair and tie it around your familiar’s collar, to protect them and hold them near.

♥ Take a piece of their hair and wear it in a locket around your neck or keep it near your person.

♥ Hair holds our magical DNA and is a language all its own. When we exchange pieces of hair with our familiar, it is a personal talisman of love, care, and magical bonding.

♥ Of course, with our sweet familiars, the only real spell we need is said when we look into each other’s eyes and know that we’ve got each other’s backs, in this lifetime and beyond.